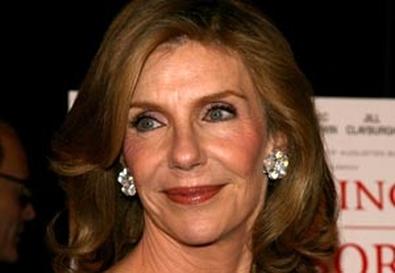 Photo Source: Kevin Winter/Getty Images
Jill Clayburgh, the sophisticated Hollywood and Broadway actress known for portrayals of empowered women in a career spanning five decades, highlighted by her Oscar-nominated role of a divorcee exploring life after marriage in the 1978 film "An Unmarried Woman," has died. She was 66.

Her husband, Tony Award-winning playwright David Rabe, said Clayburgh died Friday surrounded by her family at her home in Lakeville, Conn., after a 21-year battle with chronic lymphocytic leukemia. He said she dealt with the disease courageously, quietly and privately, "and made it into an opportunity for her children to grow and be human."

Clayburgh, alongside such peers as Anne Bancroft, Shirley MacLaine and Jane Fonda, helped to usher in a new era for actresses in Hollywood by playing women who were confident and capable yet not completely flawless. Her dramatic turn as a divorcee exploring her sexuality after 16 years of marriage in "An Unmarried Woman" earned Clayburgh her first Oscar nod.

"There was practically nothing for women to do on the screen in the 1950s and 1960s," Clayburgh said in an interview with The Associated Press while promoting "An Unmarried Woman" in 1978. "Sure, Marilyn Monroe was great, but she had to play a one-sided character, a vulnerable sex object. It was a real fantasy."

The next year, Clayburgh was again nominated for an Academy Award for "Starting Over," a comedy about a divorced man, played by Burt Reynolds, who falls in love but can't get over his ex-wife. For the next 30 years, Clayburgh steadily appeared in films and on stage and television, often effortlessly moving between comedic and dramatic roles.

Besides appearing in such movies as "I'm Dancing As Fast As I Can," "Silver Streak" and "Running With Scissors," Clayburgh's Broadway credits included Noel Coward's "Design for Living," the original production of Tom Stoppard's "Jumpers," and the Tony Award-winning musicals "Pippin" and "The Rothschilds."

Clayburgh's work also stretched across TV. She had a recurring role on Fox's "Ally McBeal" as McBeal's mother and most recently played the matriarch of the spoiled Darling family on ABC's "Dirty Sexy Money." She earned two Emmy nods: for best actress in 1975 for portraying a tell-it-like-it-is prostitute in the ABC TV film "Hustling" and for her guest turn in 2005 as a vengeful plastic surgery patient on FX's "Nip/Tuck."

Clayburgh came from a privileged New York family. Her father was vice president of two large companies, and her mother was a secretary for Broadway producer David Merrick. Her grandmother, Alma Clayburgh, was an opera singer and New York socialite.

Growing up in a such a rich cultural mix, she could easily have been overwhelmed. Instead, as she said in interviews, she asserted herself with willful and destructive behavior — so much so that her parents took her to a psychiatrist when she was 9.

She escaped into a fantasy world of her own devising. She was entranced by seeing Jean Arthur play "Peter Pan" on Broadway, and she and a school chum concocted their own dramatics every day at home. She became serious-minded at Sarah Lawrence College, concentrating on religion, philosophy and literature.

Clayburgh also took drama classes at Sarah Lawrence. She and her friend Robert De Niro acted in a film, "The Wedding Party," directed by a Sarah Lawrence graduate, Brian DePalma. After graduating with a bachelor of arts degree, she began performing in repertory and in Broadway musicals such as "The Rothschilds" and "Pippin."

Alongside Richard Thomas, she headed the 2005 Broadway cast of "A Naked Girl on the Appian Way," Richard Greenberg's comedy about one family's unusual domestic tribulations.

Director Doug Hughes, who directed her in a production of Arthur Miller's "All My Sons" at the Westport Country Playhouse in 2003, called her for "Naked Girl."

"That she has the time to do a run of a play is just an extraordinary boon because I've had the pleasure of seeing her play a bona fide tragic American role beautifully, and I have had the pleasure of directing her in a very, very smart light comedy and be utterly brilliant in that," he said in 2005.

During an interview that year, Clayburgh explained the unglamorous side of acting.

"One of the funny things about actors is that people look at their careers in retrospect, as if they have a plan," she said.

"Mostly, you just get a call. You're just sitting there going, 'Oh, my God. I'm never going to work again. Oh, God. I'm too old. Maybe I should go and work for Howard Dean.' And then it changes."

Clayburgh will next be seen playing the mother of Jake Gyllenhaal's character in the upcoming film "Love and Other Drugs."

She is survived by three children, including actress Lily Rabe, Michael Rabe and stepson Jason Rabe.

There will be no funeral, Rabe said. The family will have a memorial in about six months, though plans have not been finalized.