The Pain and the Itch 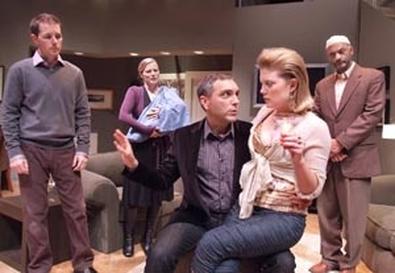 What initially seems like a cross between a Christopher Durang absurdist farce and an enigmatic Harold Pinter puzzler turns into a brutally realistic view of hypocrisy and bile in an ostensibly idyllic yuppie household. Set in an upscale urban home in an unspecified city, the play shifts continually between a Thanksgiving family dinner and another gathering two months later. The elephants in the room are the unexplained presence of Mr. Hadid (Kevin Vavasseur), a foreigner wearing a skullcap; the discovery of a nasty vaginal rash on precocious 4-year-old Kayla (Ava Feldman, who alternates with Olivia Aaron); and the family's bizarre fears that an avocado-munching monster is stalking their home.

As the well-meaning but misguided Clay, Price gives a wonderfully textured performance, tapping into the tragicomic tension in Norris' bristling dialogue. Martin is likewise brilliant as his embittered spouse, a mercenary matriarch with a touch of Medea. Lowell is deliciously despicable as the wisecracking sibling, and Davies—sporting a pitch-perfect dialect—garners huge laughs as the clueless guest who nonetheless makes more sense than her deluded hosts. Rhodes is a hoot as the self-righteous grandma, and Vavasseur does fine work in his small but important role. Feldman, having no dialogue but screeching beautifully on cue, is highly impressive. This astutely designed and intelligently rendered production is a shared feather in the cap for two of L.A.'s most adventurous theater companies.