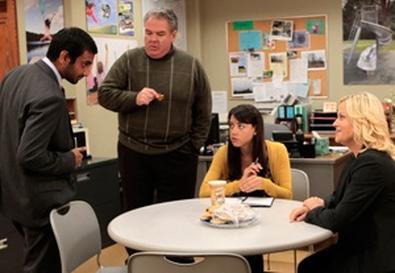 On the NBC sitcom "Parks and Recreation," which just completed production on its fourth season last week, longtime Pawnee Parks Department employee Jerry Gergich is a loving husband and father who also happens to be a talented painter and pianist. But viewers rarely see this side of him because the other characters in the show berate, embarrass, and abuse Jerry every week.

"In the writers' room, they'll have to stop coming up with terrible things for Jerry, because they can go on all day," actor Jim O'Heir, who plays Jerry, says proudly. "It's their favorite thing. But what I love about our show—and you do not see it often—is there is love between these characters. I don't take credit for it. I'm not writing this brilliant stuff. We just have the most amazing writers."

Backstage: How do you maintain separation between yourself and the character you play?

Jim O'Heir: You get fan mail from people, and it's heartbreaking from some of them who are the "Jerrys" of their office. The difference between those people and myself is that when they yell "cut," I've got people hugging me and laughing together and having a great time. And these people, they don't. They're that person of their office, and that's heartbreaking. But we're actors. If you get a part, just commit to it. Jim O'Heir is not Jerry.

Backstage: You work with some talented improvisers in the cast, like Amy Poehler, Aziz Ansari, and Aubrey Plaza. How much of the show is improvised?

O'Heir: I went to improv school with people like Matt Walsh, who started the UCB with Amy. We did The Players Workshop in Chicago, and Second City. He had an improv group, I had an improv group. But I've got to tell you, Amy Poehler is in a different league. She's mesmerizing, and it just seems so easy.

We do what we call a "fun run" after every scene, which means we're gonna do it again, and anything goes. But 90 percent of our show is what was written on paper, because the writers are writing it so funny and brilliantly that they don't need us.

Every once in a while, something is a must-add for the show. There was an episode called "Flu Season," and everybody was getting sick, and Leslie (Amy Poehler) was sick. Chris Pratt, out of nowhere, says, "Oh, Leslie, I looked it up on the computer, and it says you could have 'network connectivity problems.'" That was just brilliant.

Backstage: Even though the show is popular among critics and young viewers, the ratings have not been strong enough to guarantee your renewal for a fifth season yet. How do you deal with the uncertainty?

O'Heir: As an actor, this is pilot season right now. So if you're in a show and it has not been decided [whether it is being renewed for another season], which they really don't have to tell you until May, a lot of pilots will not consider you. It puts an actor in a tough spot, because we don't know. If I try to get another pilot this season a lot of the places go, "No, we're not seeing him. Why would we shoot a pilot with him that we would have to reshoot if his show comes back and we get picked up?"

Last year, at the beginning of March, we heard [that "Parks and Recreation" had been renewed]. So it was like, "Okay, I'm good! I got a show! I can enjoy the summer, do some other work, and know that at the end of July we're all back together." And I hope that happens this year. I can't imagine not having them always in my world. But it's the nature of television. No show goes on forever.

Backstage: So many people might be watching "Parks and Recreation" online, or on their phone, or on DVR, but those numbers still don't get counted the same way as TV viewers at this point.

O'Heir: I have a couple of rental properties with young people living in them. They don't even have TVs. I walked in one day to fix something, and I'm like, "Where is your television?" They don't have one. Everything they do is online.

Backstage: Wait, you handle the maintenance of those rental properties yourself?

O'Heir: If something has to get done, someone's got to do it. And of course, things go wrong. There've been many Jerry moments when there's a hammer in my hand, believe me. (Laughs.)