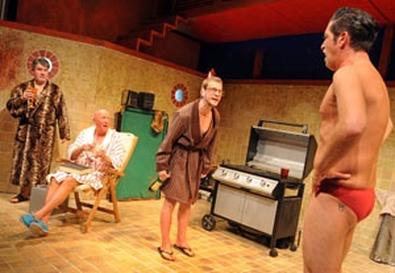 Photo Source: Robert Day
The four middle-aged guys in Speedos and bathrobes who are living in a drained swimming pool in Enda Walsh's "Penelope" look pretty comical. At the same time, a substantial splatter of dried blood on one of the walls portends no small amount of danger. Thus it is with Walsh's latest play, in which seriousness and ridiculousness collide at a dizzying and engrossing pace.

Riffing on Homer's "Odyssey," the play explores the existential crises of these former businessmen, who came to woo the title character during her husband's absence. They're the final four standing, and on the day the play takes place, they know that unless they set aside their rivalry so that one of them can win her, Penelope's husband, who's just at hand, will kill them all.

They each get a chance when Penelope (Olga Wehrly) appears inside her glass house just above the pool (the detail-rich set design is by Sabine Dargent) and watches them on a flat-screen television. The pompous Dunne (Denis Conway) delivers an overwrought poetic panegyric. Quinn (Karl Shiels), an alpha-male blowhard, offers a hysterical quick-change dumb show in which he plays famous couples such as Romeo and Juliet. The pill-addicted Fitz (played with gorgeous restraint by Niall Buggy) finds that his moment in the spotlight compels him to assess his life's meaning.

Unfortunately, the guys, cutthroat to the end, undermine one another, as they have since they arrived. Their past and present behavior causes the nebbishy Burns (an excellent Tadhg Murphy) to assess what the competition has made of them morally and whether any of them are capable of love.

Directed with precision by Mikel Murfi, it's haunting and hilarious stuff, and theatergoers may find it difficult to forget either the play's comic opening scene, in which Quinn roasts a sausage with a blowtorch, or its final one, after more blood has been spilled.