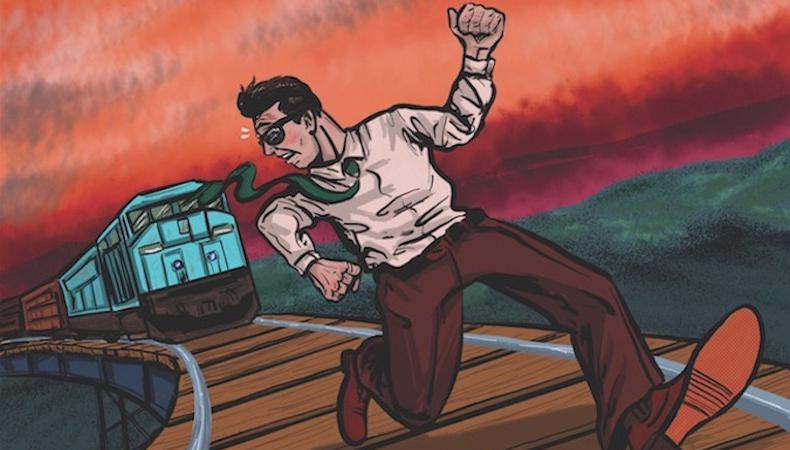 The dream is always the same.

I’m standing in an open field surrounded by gorgeous scenery. The sun is warm. There’s a gentle breeze. It’s a perfect day. But then I look down and realize I’m standing on train tracks. That’s when I start to feel the vibration under my feet. Behind me, I can hear a loud roar that’s getting louder by the second. I want to run, but I’m paralyzed with fear. There’s something coming, something terrible, and I cannot get out of the way and I cannot turn to face it but I know exactly what it is, and when I wake up screaming, I am yelling its horrible name:

I’ve been an agent more than 12 years now, and I still suffer through this damn nightmare every January. I’ve learned to accept it the same way I accept this outdated concept of pilot season that the networks refuse to give up on. But the joke will be on them when they cease to exist and are replaced by hundreds of streaming services.

Well, that’s the future and we must all live in the present, right?

READ: 4 Ways To Crush The Busiest Pilot Season Ever

Pilot season starts in mid-January and it’s usually over by early April. The majority of projects that are cast during this three-month period are network pilots. It’s an overwhelming time because there’s too much going on during an absurdly short window. Casting directors are in a constant state of competition, trying to grab the best actors before someone else hires them. And agents are in an extreme state of tension, pushing to get their clients as many opportunities as possible. So, as I’m sure you can imagine, everyone’s nerves are going to be frayed for the next few months.

The reason for this tension is money. As an agent, I have to book as many actors as possible in series regular roles so I can maximize my chances of having clients on a series. I could place seven of my people on pilots, but that doesn’t really mean anything unless some of those pilots go to series. That’s where the real money is.

Look at it this way: An established actor might get $30,000 for a series regular role. But that’s all he gets if the pilot doesn’t get picked up. On the other hand, if the show ends up on the air, he’s got a shot at 22 episodes during that first season for a total of $660,000.

From my perspective, this is long-term money, and that’s the sweetest kind. I can book an actor now and those commissions could last for years. That’s cash coming in while I’m working on the next deal. This is how agencies keep their doors open.

On the other hand, a rep’s future could get dicey if he doesn’t have any clients on a series. We all have to earn our keep, and guys like me can get canned if the numbers don’t add up at the end of the year. That’s why I suffer through that damn nightmare every January.

So far, I’ve managed to avoid getting crushed, but I know there’s a train out there with my name on it. Till then, I’ll keep signing and pitching and negotiating, over and over and over….