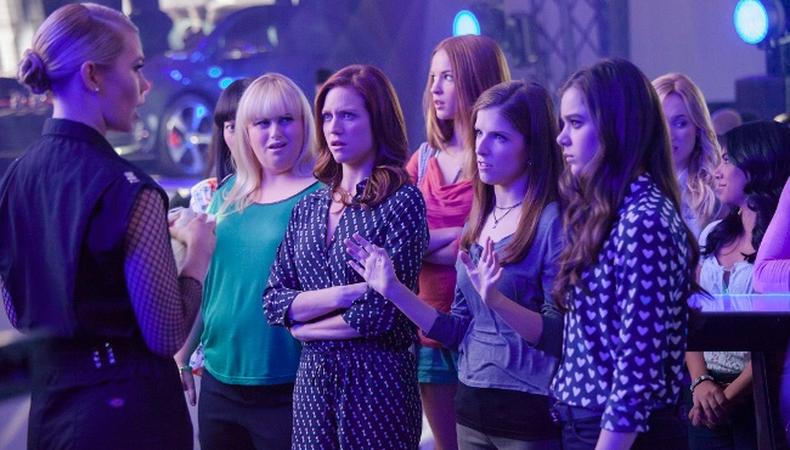 “When [producers Elizabeth Banks and Max Handelman] called me and told me there was gonna be a sequel, I felt like I was gonna barf,” says “Pitch Perfect” screenwriter Kay Cannon. “I think the reason I felt that way is because I know sequels are hard, and I know if you fail at the sequel it changes the way people view or feel about the first one,” she adds.

But the beloved 2012 film, grossing an estimated $65 million, became an instant classic. Starring Anna Kendrick, Rebel Wilson, Skylar Astin, Brittany Snow, and Anna Camp, “Pitch Perfect” follows all-female collegiate a cappella group the Barden Bellas and their rise to the top. The movie gave us the hit song “Cups,” or “When I’m Gone,” and the now iconic phrases “aca-scuse me,” “aca-awesome,” and “aca-bitches,” among others.

In the first film, the Bellas got a bit of a revamping à la “Bring It On”—the 2000 cheerleading film which Cannon admits was a huge structural influence on “Pitch Perfect.” Among the group’s new members were Kendrick’s edgy Beca and Wilson’s Fat Amy, determined to win the International Championship of Collegiate A Cappella finals on talent alone.

In “Pitch Perfect 2,” Cannon was determined to raise the stakes, so she took the Bellas overseas to compete in an international tournament no American team has won before. “It was, like, What’s the next biggest, grandest thing that they can compete in, in which they’re the underdogs again?

“For me, creatively,” she says, “it was important that the Bellas become the underdogs again. It was like seeing how they fall from grace, what success has done to them, and then having to rebuild and come back stronger than ever.”

Additionally, the Bellas were freshmen in the first film, and in the sequel, Cannon says audiences will see them graduate. “It’s really about how they individually deal with the idea of graduating and moving on. It’s also wrapped up in that [idea of], what is gonna be the legacy of the Bellas? Whenever you leave college it’s, like, what are you leaving behind?”

And with a third installment of the musical motion picture franchise already announced, Cannon’s own contribution and legacy has started to take form—including her part in Wilson’s career. Despite the Australian actor having been on TV series prior to her film roles, it wasn’t until 2011’s “Bridesmaids” that she got her “big break,” so to speak.

“My biggest contribution to the first movie was the casting of Rebel Wilson,” Cannon declares, explaining the actor friended her on Facebook and sent her a “really nice message just because she was a fan of ‘30 Rock’ and a fan of my writing.”

After seeing “Bridesmaids,” Cannon says she sent Wilson a Facebook message saying, “Have the script. Just read it.”

“I said nothing about Fat Amy. Just, ‘If you don’t mind reading it, see if you respond to anything,’ and she sent me a message back that said, ‘I think I could make a smashing Fat Amy!’ So, yeah! Thanks, Mark Zuckerberg!” she says, laughing.

Though the process has been fun, with a budget triple its predecessor and millions of fans worldwide, Cannon was not immune to pressure.

“I just thought a lot about the fans of the movie,” she says. “Part of the challenge was giving the audience what they love about the first one and making them feel that joy again—making sure that the money they’re paying to see the movie is worth their time and worth it for them.”