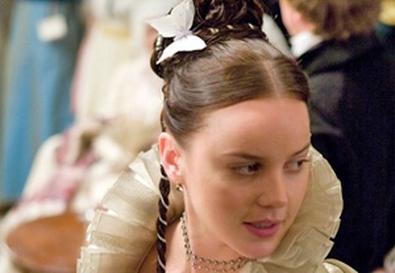 In "Bright Star," Abbie Cornish depicts Fannie Brawne, the lover of Romantic—and doomed—poet John Keats. Keats and Brawne never married, but after he died Brawne wore a widow's black dress for three years and never took off the ring he gave her. Cornish spoke to Back Stage about how she got into the character of an 18th-century woman whose love for Keats continued even decades after his death.

"The story is centered on the love Keats and Fanny had for each other. So anytime I felt myself searching for answers, I'd go back to their love, and that would answer all questions. I read the letters that she and Keats wrote to each other and his poems, which were such a key into the world of that time. At first I let the character and story wash over me and tried not to judge or calculate it. Each character has a journey. I just dive into that journey and let it be what it is. That's what's so interesting for me as an actor. Taking on a new film, I never know how I'll get into character. Fanny Brawne found herself in me, I guess. She was very still and balanced and centered. And when she was out of balance, it was with this overwhelming sense of emotion, and then she'd pull herself back. But she always had such a strong focus and purpose. The physicality for me came from her personality and also the time, the 1800s, and the way a woman would hold and carry herself. There were the clothes she'd wear and the corset. I got used to them slowly. But after wearing them for 12-to-14-hour days with one day off, when I put on jeans and a T-shirt, it felt strange."