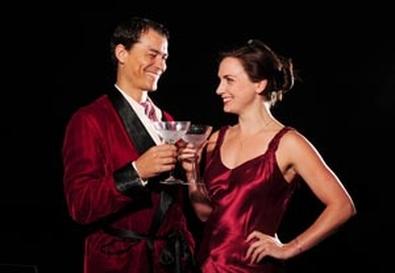 Photo Source: Carlos Delgado
Noël Coward's classic 1930 comedy all too often endures an overly mannered treatment, pushing the arch sophistication at the expense of the darker edges, or vice versa. No such problems plague this satisfying revival, which unfolds with equal measures of crisp assurance and spontaneous feeling.

Under director Luke Yankee's expert guidance, Coward's account of a divorced couple whose passion reignites while honeymooning with their second spouses seems almost newly minted. The situation may be familiar and feather-light, the syntax approaching quaintness, but Yankee addresses the piece with such unpretentious style—thankfully compressing Acts 2 and 3—that only era specifics keep it from being contemporary in tone and content.

Major kudos to the cast, starting with lead actors Freddy Douglas and Caroline Kinsolving, who play still-infatuated Elyot and Amanda as though to the manner born. Douglas leavens natural charm with exactly the right mixture of affect and acrimony, clippingly delivering the bons mots and tearing into the rages in a bravura yet disciplined turn that originator Coward might have envied. Kinsolving is entirely his match, especially adroit at physical comedy and commanding a vocal dynamic that runs the gamut from clarinet-like subtlety to bassoon-sounding octave drops. When this clearly made-for-each-other pair warbles Coward's "Someday I'll Find You," the romantic aura is palpable, and by their Act 2 battle, all bets are hilariously off.

It is usual for an Elyot and Amanda to run away with the show, which makes the achievement of Jennice Butler and Adam J. Smith as their abandoned partners doubly impressive. Butler is fluffy and earthbound as Sybil, tickling at her descents into wailing, while Smith manages to make stolid Victor a more sympathetic buffoon than the usual portrayal. Only limited stage time hinders Wendy Cutler, who attacks the role of Amanda's maid as though snacking on brioche while nobody was looking.

Kurt Boetcher's set, all art deco swirls and passionate pinks, is perhaps a shade overstylized, but it certainly takes Bill Georges' moony lighting well, and Kim DeShazo's costumes convey soigné aplomb. This may not quite be a "Private Lives" for the ages, but its accomplished wit more than suffices for the present day.