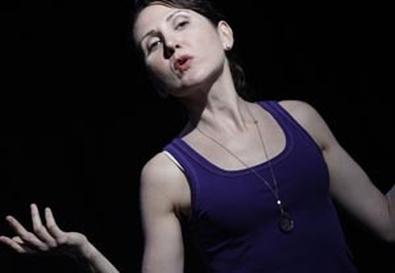 Photo Source: David Flores
Michael Bonnabel's solo show "The Good Boy" is now running at the Los Angeles Theatre Center, and it has been quite a journey for the writer-performer. He'd wanted to create his own work for a long time, if for no other reason than to demonstrate his range as an actor. "I thought if no one is going to do it for me, I had better do it for myself," he says.

"The Good Boy," Bonnabel's first dramatic solo show, was presented at L.A.'s Zephyr Theatre at various stages in its development and ultimately "got the attention of a few theater companies, who offered to produce the play a couple of years ago," he recalls. "We eventually got a production done at the Bootleg Theater. That was last summer. The Los Angeles Theatre Center sent a couple of emissaries to see the production there and approached me about bringing it into their theater as part of their spring 2011 season. And here we are with a completely revamped production."

Bonnabel's goal now is to tour the show and have productions across the country at regional theaters and schools interested in diverse programming.

Bonnabel admits he has been lucky, with both the Zephyr and LATC having approached him about producing "The Good Boy." "I didn't have to go through the normal process of submitting my plays to them," he says. "They came to me and offered their theaters to produce my play."

Other performers Back Stage spoke with have had to go through the submission process. Many say that festivals are a great starting point for self-produced solo shows, though festivals can vary broadly in terms of size, prestige, entry qualifications, competitiveness, cost, and the financial arrangements between producers and participants.

The cost of travel and accommodations can make participating in some festivals expensive. Very few artists break even. The major virtue in being part of a festival is its structure and the contacts it offers. Some festivals provide a theater for each production, while others require that the actors find their own venues, though a list of participating theaters may be made available. Their specifications and seating capacities can usually be found online.

"There are a ton of festivals," says L.A.-based performer Kimleigh Smith, who has mounted her one-person autobiographical show "Totally Kimleigh" as part of several festivals. "But I think it's important for me at this point to perform in those festivals where the reviews matter. I also choose cities that have a strong theater community who will come out and see you. I like festivals where the shows are close together, not spread out all over the city, and you can hear the buzz about a play next door. I hire marketers who walk around handing out postcards about my show at festivals. There are different marketing companies that do this. Of course, it's better to have friends who know the show and want to do it."

For the most part, festivals have publicists who try to bring in reporters and critics. But performers may want to do some self-promotion as well. Smith, for example, sends out press releases and then follows up with phone calls, but she cautions that "unless a show is going to have a four-week run, it's hard to get press."

Others who've performed solo shows at festivals and elsewhere have tried to attract producers. Smith talks about producing her show at an L.A. theater two nights a week and then, ideally, attracting a producer who will propel it to an even larger forum. And if some elusive film producer wants to package the show as a movie—with Smith as writer and star—better yet, she says. But all agree that before inviting a producer to your show, you should know his or her work and make sure your material is in sync with the producer's interests and economics.

Some actors use the solo show as a launching pad to signing with an agent. Interestingly, Andrea Caban—whose first multicharacter solo show, "You Got Questions? I Got Answers!," earned a 2008 New York Innovative Theatre Award and two additional nominations—has been focusing her efforts on literary agents. Because her immediate goal is to see her current show, "Questions My Mother Can't Answer" (opening soon as part of New York's soloNova Arts Festival), performed at regional theaters, she thinks a literary agent may be more helpful—though she is determined to be included in the package as the show's performer. "I've also submitted the play to several nonprofit theaters in New York," she adds.

Membership Has Its Privileges

Caban is a member of the New York theater company Coyote Rep, and as such she has a home base where she can develop and perform her shows. Indeed, her first solo piece was spawned as part of a company project, which explored the theme of isolation through one-person performances.

As a co–artistic director of New York's Nomad Theatre Company, Grant Neale also has a home base, which has commissioned and produced his solo play "Polanski Polanski," in addition to providing him, through his long tenure with the company, with many contacts. Neale never saw himself as a solo artist, but several things pushed him in that direction, including being told repeatedly how much he resembled director Roman Polanski. When Neale saw the documentary "Roman Polanski: Wanted and Desired," he felt compelled to create a solo show, with the controversial director as hero or anti-hero, depending on your point of view. "There was such fodder here for a dramatic piece," Neale says.

New York's Desiree Burch, by contrast, has been doing solo shows since college, and for her, they are an end in themselves. "I'd love to be in other people's work and I'd love to do films," she says, "but producing my own solo work has given me agency not to wait to be discovered. I'll discover myself."

Currently on her fifth solo piece, "Tar Baby," Burch is well-versed in the festival circuit ("Tar Baby" will also be part of soloNova) and in finding theaters that will present her work. In New York, for example, she has performed at Dixon Place and the Tank. For her, the theater's sensibility and the audience it draws are what largely determine whether she wants to perform there. Dixon Place and the Tank are not only "artist-friendly, but friendly to women, and women of color," she says. "I'm always looking for theater organizations that are in sync with my themes and share my goals and ethos."

Burch also mentions her need to know a theater's physical layout way ahead of time, preferably by seeing performances there. "Usually there's a pillar or some other form of blockage," she says with a laugh. "But the space itself becomes another form of creative input. It is part of the challenge, and my work has to be adaptable. How do I use the space to inform my show? You cannot be married to physical circumstances. I may ask for a podium, but if they don't have it, I'll go with two milk crates." The other option is toting around backpacks, suitcases, and shopping bags of miscellany, which most solo performers do anyway, she says, but there's only so much one person can carry.

Neale, who will soon perform "Polanski Polanski" in three Romanian cities, also needs to know what a theater will provide before he steps through the door, whether it's a podium or technology. His show utilizes video projections, and while most theaters have a projector, he says, he'll need to rent a high-powered laptop for his journey. Though solo on stage, in transit Neale will be accompanied by a video person, a lighting and sound designer, a stage manager/administrator, a director, and the playwright. On future tours, he hopes to pare down his team, but he views this trip as part of their payment. Any money they may have received until now has been negligible at best, he says.

Finding and Funding Your Team

Unlike many of the others, who wrote or co-wrote their shows, Neale hired a writer, Saviana Stanescu, to script his, largely because she was of Eastern European descent and he felt that background was essential in tackling Polanski's story. Equally important, he says, was the fact that he had performed in an earlier play of hers and admires her work. Neale's financial arrangement with Stanescu is unwritten and informal, meaning she receives some remuneration but the precise amount depends on how much the show earns. He has a similar arrangement with director Tamilla Woodard, whom he brought on board because she has helmed many solo shows "and I like her and I knew that she was an actor as well as a director," Neale says.

Caban also hired a director, though in her case it was a painstaking process. "The solo-artist-and-director relationship is very intimate," she says. "I needed a super-safe space with someone. I needed a woman around my age and life experience, with an understanding of where I was coming from. I asked casting directors who were familiar with my work for referrals and interviewed dozens of women directors. I met with a lot of amazing women." Caban ended up tapping Rachel Eckerling and paying her a prearranged fee, and she'll pay her the same fee for the next remounting. Caban hopes that if the play is picked up commercially, Eckerling will be able to renegotiate the fee with the producer.

Caban's solo shows have only whetted her appetite to do more, while unexpectedly providing her with a vehicle for showing herself off as an actor, which might lead to other roles. Neale echoes her ambition, though he admits he still prefers working with other actors. "The solo show is challenging," he says. "It requires me to continually work off myself and be that selfish. It's been interesting."

For all the solo actors, there's been a learning curve.