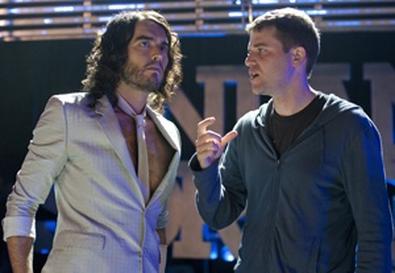 What qualities do you look for in an actor when casting a comedy?

I know it's often one of the hardest things to do, especially when you're auditioning for a comedy, but I love when an actor focuses on the action and truth of the scene instead of trying to be funny. If possible, let the play do the work, and if it's funny and you're able to embody the character honestly and are making strong, bold, and high-stakes choices, usually the play will carry you. You'll be funny in the context of the story instead of just trying to get laughs.

I think in most plays, comedy is about action and the extremity of the situation. We laugh because there's something so human about what's happening onstage that it touches the clownish humanity in all of us.

There are definitely comedies that require a certain style, but again, you can't slap the idea of style on top of something and trust it to be funny. You still have to play the action and situation of the story. Remember that the world of any play, whether it's a Feydeau farce or a commedia dell'arte by Goldoni, is just as real to the characters who inhabit it as to those living in a contemporary American play. No matter what style of play you're auditioning for, the comedy (or drama) still emerges from what the characters want and how they go about achieving their aims.

Los Angeles; writer-director, 'Get Him to the Greek'; director, 'Forgetting Sarah Marshall'; upcoming: scripts for 'Gulliver's Travels,' 'The Greatest Muppet Movie Ever Made,' 'Stretch Armstrong'

I look for a few things:

1. That the actor's performance be grounded and realistic. As soon as the actor feels like he or she is winking to the camera, the scene ceases to be funny. The more grounded you are, the funnier the scene will be.

2. That the actor's improv feel real rather than jokey. Oftentimes an actor will improv a bunch of funny jokes or lines, but it won't come across as comedic because it doesn't feel real. When in doubt, improv as if the whole situation is completely real rather than trying to hit jokes.

3. The reaction is the most important part. In comedy, more often than not you get a laugh off the reaction shot rather than the actual written joke. So rather than trying to hit the joke hard, focus on your reaction to the situation or to the line.

4. That the actor be able to take direction well. You don't know what I want. Only I do. I've had actors come in with completely the wrong take. I'll tell them what I want, and then they nail it and I cast them.

5. Chemistry. This is something that you can't control, so don't worry about it. But I thought I'd mention it anyway.

Casting is an art. The wrong choice can ruin a film; the right choice can make it. If a film is properly cast, 75 percent of a director's job is already done. You must know the essential qualities of your characters before you cast. If a character is warm and funny, you can't cast someone who is hard and cold. No matter how good they are.

I look for an actor who is good at improv and not afraid to try different things on every take. In a comedy, the worst thing an actor can do is deliver the same reading—even if it's a good one—each time. If an actor is good at improvising, let them do a few takes as written and a few ad-libbed—basically one for me, one for them.

P.J. Byrne, an up-and-comer with stellar comic timing who plays Gary in "Finding Bliss," is an actor who loves to ad-lib and is brilliant at it. Jamie Kennedy is a perfect example of a comic actor who is willing to take enormous risks and try different approaches on every take. Kristen Johnston is also able to convey the meaning of the scene in different ways and be hilarious. Good acting—comic or dramatic—is all about being committed to the performance and making it real.

Finally, I look for an actor's attitude. If I like the person, I know I'll enjoy working with him or her and will have a good chance of getting a great performance. Attitude is as important as talent. So when you audition someone, make sure you audition their attitude as well as their acting.