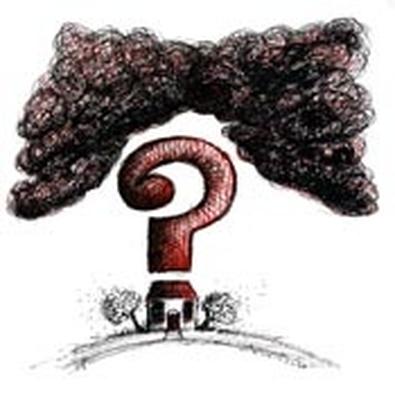 What if you decided to write a comedy whose dialogue consisted almost entirely of questions? Wouldn't the humor derive largely from the sentence construction, the challenge of turning declarative statements into inquisitives? Wouldn't it be insanely verbal, with little opportunity for stage action or philosophical insight? Wouldn't it be slight? And wouldn't it have to be short? That's the exercise Tara Dairman has set for herself with The Question House. The show is really an extended sketch, but it's a graceful act of skating on thin ice.

Dairman takes us into a Sheepshead Bay brownstone whose living room doubles as a research consulting office run by Harvey Krytz (Howard Green), who believes he is on sacred ground. Centuries ago, it seems, God spoke to a group of rabbis on this spot, and He did the same to Harvey in 1967, commanding that only questions be spoken there. Declarative sentences are allowed on the backyard patio or the front stoop. But within those walls, it's ask, ask, ask, or you'll be sorry. Dairman must have broken the question key on her keyboard with this script.

The Question House is rather like watching a juggling act, waiting to see if any of the balls will drop on the next line -- but no, the next line always ends with a question mark. Obviously, anything this inconsequential can't offer much in the way of juicy acting parts. But Cam Kornman as Krytz's long-doting, Dody Goodman–like spinster secretary (and, naturally, all-time Jeopardy! champion), is absolutely adorable, and Snezhana Chernova as a skeptical research assistant works an impressive array of Eastern European invective into her brief stage time. (She dares to use the declarative on the premises and meets a sorry end.)

Director Catherine Siracusa keeps the tone light and daffy, and silly as the whole thing is, the 40-minute running time doesn't feel overextended. I giggled pretty consistently. As one character says, who could ask for anything more?

Presented by Breadbasket Productions as part of Frigid New York 2009