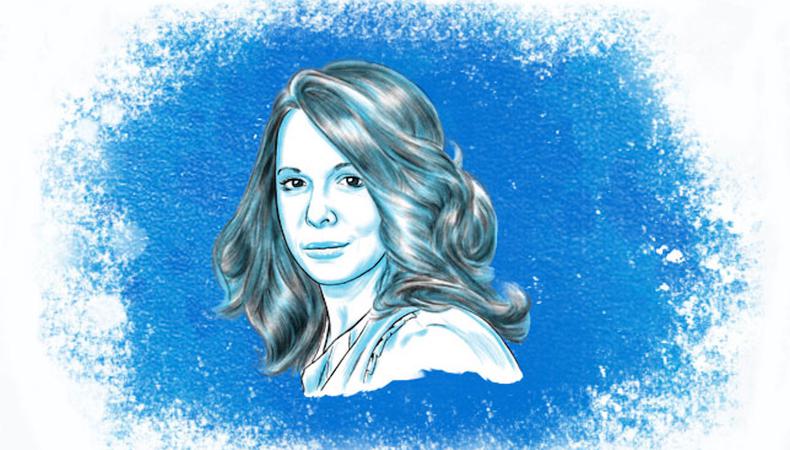 Three-time Tony nominee Carolee Carmello has appeared in 13 Broadway shows since her debut in “City of Angels” over two decades ago. As she gears up for opening night of her 14th, “Tuck Everlasting,” based on the beloved children’s novel, the actor chats with us about her most memorable survival job, her go-to audition songs, and more.

Tell us about “Tuck Everlasting.”
My character is Mae Tuck, the matriarch of this Tuck family who’ve become immortal by drinking from this magical spring. So this family of four—Mae, her husband, and their two boys—have spent close to 100 years hiding away and avoiding contact with people because they have this strange secret. And then all of a sudden into their midst comes this full-of-life 11-year-old girl, Winnie Foster, and she learns some big life lessons, but also turns their lives upside down.

On whom do you have an acting crush?
The first person who comes to mind is Cherry Jones. Someone once told me that they thought I was the musical theater version of Cherry Jones, and I thought that was the greatest compliment ever in my whole life. Everything I see her do… I just think she’s filled every second of her time onstage with interesting and truthful choices, and I find her endlessly fascinating to watch. So I certainly don’t really put myself in the league with her, but I feel like if I watch her, I get inspired.

What was your most memorable survival job?
I sprayed perfume in Macy’s—and you never forget that. It was very flexible; if you got an audition at the last minute they’d say, “OK, instead of coming in at 11, you can come in at 2 o’clock this afternoon.” But that’s not a job that’s good for your ego. As you probably know, when you walk through a department store and people spray perfume, you’re, like, “Ah, get away from me!” And you have to stand there and keep smiling and try to sell your Estée Lauder. In a way, it’s great training for all the rejection you get in this business.

What’s your go-to audition song?
There’s a 1940s song I sing sometimes called “Again.” It’s a little obscure, but I kind of like it because it’s not super overdone. For my 16 bars—you know, when I first moved to the city and that was all they would let you do—I used to sing a song called “Golden Rainbow,” because it ends with lots of belt-y high notes, and when you’re singing 16 bars you want to get as many loud, belting notes in as you can. And sometimes, if I need something a little more comedic, I’ll sing “A Trip to the Library” from “She Loves Me.”

Which of your performances has left a lasting mark on you? The one that comes to mind first is “Parade,” I think because it was the first time that I had really created a role from the very beginning of the process and seen it through to the Broadway opening. I had done some Broadway shows before then, but I had never been the originator of a role. And it was so beautifully written, and so beautifully directed by Hal Prince. It was just an amazing experience.

How did you get your Equity card?
During college, I was doing one of my community theater jobs, and there was a producer who saw me and offered me a summer job at his theater in the Adirondacks. He had this little dinner theater [that] didn’t do huge productions, but he offered me a job for the summer after I graduated college. It was the first time I had ever heard of an Equity card.

I remember standing in my mother’s living room on the phone with this producer while he was explaining to me what an Equity card was. [He said], “If you want to pursue this as a profession, you really have to join this union. But if you don’t want to do this professionally [and] just want to continue what you’re doing, work in another field but do community theater, then you really shouldn’t have an Equity card, because it’s going to prevent you from doing those kinds of jobs.” I remember that moment and standing there at 20 years old [thinking], OK, this is a big crossroads. I’d never even entertained the possibility of doing this for a living. I always just did it as a hobby. The idea of committing myself one way or the other seemed kind of daunting. So I joined the union and did it for the summer, and I met all these actors who had come up from New York and they were all like, “You should move to New York!” And it was still a far-fetched idea, but in the back of my mind I was saying to myself, “Don’t get to your 50s and regret not having tried this.”

In an alternate universe in which you aren’t an actor, what would you be doing?
I’d probably be a teacher, although I don’t know that I’d be teaching theater. It’s not something that I can teach. Even though I do it for a living, I’m not sure that I can articulate it well enough. But before I went into this business, I always wanted to be a teacher. I always thought that’d be rewarding. And of course, I went to college for business administration, so at some point in my life I imagined that I’d be in some corporate office somewhere being, like, a personnel manager for some big firm like IBM. That was always my dream.

How do you typically prepare for an audition?
The first thing I think about is, What would I look like? What does this character look like? What is her hair? What is she wearing? What is her accent? What are the outward things that people would notice about her? Does she wear a lot of makeup? Does she wear heels or boots? I try to figure out that stuff. If it’s a musical, I try and figure out the style of singing, because there are lots of different things you can do. Even if you sing the same song for every audition, you can sort of slant it in different ways and make it more appropriate for the show. And then I try and memorize whatever they give me, because it’s so much easier to interpret if you’re not buried in the pages.