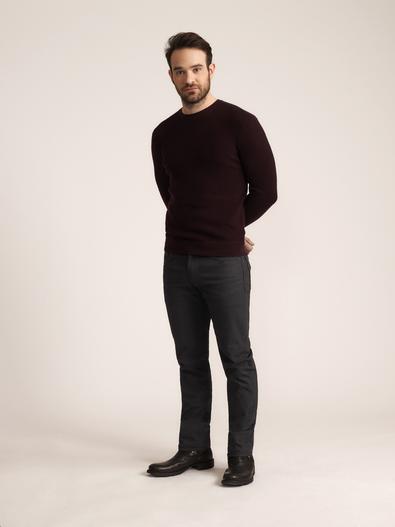 From a supporting role in “The Theory of Everything” to leading man on Netflix and Marvel’s “Daredevil,” English actor Charlie Cox talks about his acting crush, what he’s most afraid of, and the challenge of conveying emotion without the use of his eyes.

Tell us about your latest project.
Marvel and Netflix have teamed up to do a series of shows, the first of which is called “Daredevil.” I play Matt Murdock, who is a lawyer by day and a masked vigilante by night.

What have you learned about your acting on “Daredevil”?
Matt Murdock is blind, although his senses have been so heightened that he’s able to operate almost better than a seeing person. But he still doesn’t have the use of his eyes, so during the scenes when I didn’t have a mask on, I had to act blind. There had to be a deadness and I couldn’t focus on anything. What I realized is how much you use your eyes just in the subtlest ways to convey meaning to something; as an actor they’re so useful. You can say one thing but mean something completely different and say it with your eyes. It’s the one tool you think you’ll always have, and in this case I don’t. If you want to get to an emotional place, you’d look in the eyes of the other actor and it would help build that emotion and that fire you’re looking for, but I didn’t have that luxury.

Who do you have an acting crush on?
At the moment I’m so impressed with Oscar Isaac. I was watching “Ex Machina” the other night and I think he’s just brilliant.

What do you wish you’d known before you started acting?
Sometimes you think about the job that we, as actors, do. I take it very seriously and I care very much about it, but I’m paid to make believe. When you’re a kid, you go to your friend’s house and it’s, “Let’s pretend we’re both cowboys!” Without belittling it, that’s basically what I do—I tell stories. The only downside to being given that opportunity as a young man—I started when I was 19—is that you’re plagued with the fear for a long time that people might not let you do it anymore. I wish I would’ve known how daunting that feeling is.

What was your worst survival job?
I worked in between jobs when I first started. I was a photographer’s assistant briefly and then had a waitering job. There was a time I was out in Los Angeles and I couldn’t get [acting] work and I was running out of money; I couldn’t buy lunch. I would’ve done anything, but the visa I was on didn’t allow me to work in a place like Starbucks. I thought I would have to move back to London for a regular job, but luckily I got some work and have managed to survive ever since. I’m grateful I know what it’s like to be unemployed for long periods of time.

Which of your performances has left a lasting mark on you?
I’m really grateful for the opportunity I had on “Boardwalk Empire,” just because it was very different than anything I’d done onscreen. I feel like people who knew me as an actor before—probably not that many people, honestly—but the ones who did saw me as someone more versatile than they’d imagined after that show. When I started acting, I was doing these young, coming-of-age stories. I did Disney and “Stardust.” I played the earnest, sweet, trying-to-do-the-right-thing young man, and when I got the chance to play an Irish assassin, someone who doesn’t reveal all their cards all the time and is a closed book and is thinking or plotting something, always has the situation under control, it was so different.

How did you get your SAG-AFTRA card?
While I was doing “Boardwalk Empire.” Before that everything I’d done was British stuff. Or American, but it came under a British Equity project. After I’d done four or five episodes of “Boardwalk” they gave it to me.

What is your worst audition horror story?
Not too long ago a guy asked me to do a scene, and even though it wasn’t relevant, he just wanted me to play the scene drunk—so drunk that I couldn’t stand up. It felt like the scene wouldn’t end and I was just rolling around on the floor acting drunk, wishing I hadn’t agreed to it. Needless to say I did not get that job.

How do you typically prepare for an audition?
Depends on what the job is, but I always learn my lines. I never don’t know my lines. I never take the audition pages into the room. I end up relying on them or looking at them too much and it makes me feel unprepared, so I always learn my lines without fail. Other than that I just try to get a sense of the character and the script and the story, and try to be truthful.

Briana Rodriguez
Briana is the Editor-in-Chief at Backstage. She oversees editorial operations and covers all things film and television. She's interested in stories about the creative process as experienced by women, people of color, and other marginalized communities. You can find her on Twitter @brirodriguez and on Instagram @thebrianarodriguez
END_OF_DOCUMENT_TOKEN_TO_BE_REPLACED