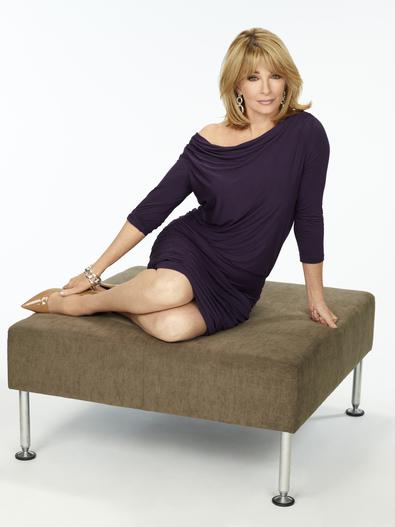 Deidre Hall has graced our television screens for over three decades as Dr. Marlena Evans on NBC’s daytime soap “Days of Our Lives.” From satanic possession to mind control, the character has been through it all. Hall talks about what she wishes she’d known before starting her career, her worst survival job, and what she learned about her specific way of memorizing lines.

Tell us what’s happening on “Days of Our Lives.”
We have what we call a necktie strangler, who’s been killing some of our counsel. They’ve arrested a young man, Chad, that I have a deep belief is not the criminal. So I’m working with him, hypnotizing him, and helping him to try and remember what’s going on.

What have you learned about yourself during this show’s long run?
Nighttime actors and film actors have an enormous amount of time to do a one-page scene. We have about a minute and a half to do a one-page scene. So you need to be so fast that you can step onto the stage, bring the emotion and the full breath to the scene, and when it’s done, stop that and move on to the next moment. It’s a very immediate way to work. Daytime actors have an extraordinary short-term memory. On the occasion that I’ve tried to memorize lines a day and a half ahead of time, they don’t stick! So I’ve learned I’m completely safe learning my lines in the makeup chair the morning we’re shooting them; that way they’ll be there. If I came back the next day to try and shoot it, they’d be gone.

On whom do you have an acting crush?
I’ve had a lifelong crush on Dennis Quaid. I’m not sure if that’s an acting crush or a social crush or an onscreen crush. I love to watch him do anything. He is delicious to me. I also love Julia Roberts.

What was your worst survival job?
I modeled for many years before I got into commercials and acting, and one of the staple jobs for models in that period was that Home Savings and Loan would have an event where they’d welcome people to open new accounts. And they’d hire someone glamorous to greet people and get them coffee and cookies. The deal was you don’t sit down, you don’t take a break, you are in high heels all day, and I never got home where I didn’t have a neck ache, backache, foot ache. And it was—are you ready? Thirty-five dollars a day. That was a survival job! What does that come to? Like, $5 an hour? I could’ve washed cars and gotten more money than that!

What do you wish you’d known before you started acting?
What feels real translates as real. If you’re having real emotions, regardless of the circumstance or how you approach the scene of the person with whom you’re co-starring…if your emotions are real they will read as real on camera. No sense in trying to fake it.

How do you typically prepare for an audition?
My auditions now are just meetings with people, because my work is fairly accessible. I prepare for a meeting by feeling completely ready, on time, properly dressed, so I stay in a comfortable state. Plus, meeting new people is always...meeting new people! [When I still did auditions,] I memorized the text and I held the script.

I think there’s great value—and I will say this of any public arena—you have to pause. I give lectures and talks to women’s groups around the country, and there’s always a moment when you step up to the podium and everybody is holding their breath—not just me, the audience as well. It’s like entering a freeway without your blinkers, like, Wow! How am I going to do this, exactly? I’m really big on just standing and looking at the audience, collecting my own breath. I have begun speeches by stepping away from the podium and saying, “First of all, let’s hear it for the dress.” Which gets a laugh and makes it seem like I’m not nervous, and then the audience can relax.

What is your worst audition horror story?
I don’t have a horror story, but I was in acting class for about 10 years. One of the scenes that I first put up in class was an audition scene from the film and then the book called “Who Is Harry Kellerman and Why Is He Saying Those Terrible Things About Me?” I know it’s a long title, but there’s a scene where a woman gets up and has to audition. It was so raw and phenomenal that I memorized the scene and got up and did it for acting class. The teacher, who did not know me or anything about me, took me aside later and says, “Are you a plant? What is this? I don’t know why you’re in this class.” It was partly because I was able to watch the performance over and over and over on video and then get up and do it; it wasn’t me creating anything, it was me copying a performance. But for auditioning actors, if you need a scene, Agh! The audition scene in “Harry Kellerman.”

Which of your performances has left a lasting mark on you?
Everybody thinks I’m going to say possession—and that will clearly be on my tombstone: “Deidre Hall, Marlena, possession.” But I worked with my twin sister, Andrea Hall-Gengler, who was not a trained actress and who came out from her teaching job as a special ed teacher in Virginia to play my twin sister, Samantha Evans. One of the more incredible scenes she had to do was a scene where she was on the stand having to testify in her own sanity hearing. I said to her, “I know the script calls for you to cry, but that’s just a suggestion; you don’t have to cry. It takes a long time for people to get comfortable crying, and what you don’t want to do is put your hands over your face and go boo-hoo-hoo; that’s just not good, so do whatever you’re feeling in the moment.” She goes, “Oh, I can cry.” I said, “Just stay true to the text and don’t do weepy weepy.” And she said, “No, I can do it.” And I was, like, Oh, now I’m scared because I know that panic that sets in when you think you can cry and then you can’t! So I was standing offstage, watching her do the courtroom scene, and I’ll be darned if she didn’t on cue burst into tears. And she walked offstage and I said, “How did you do it?” She said, “I’ve been watching you do it. How hard could it be?” She’s funny, she’s sassy, and she’s clearly gifted! Who knew?

Briana Rodriguez
Briana is the Editor-in-Chief at Backstage. She oversees editorial operations and covers all things film and television. She's interested in stories about the creative process as experienced by women, people of color, and other marginalized communities. You can find her on Twitter @brirodriguez and on Instagram @thebrianarodriguez
END_OF_DOCUMENT_TOKEN_TO_BE_REPLACED