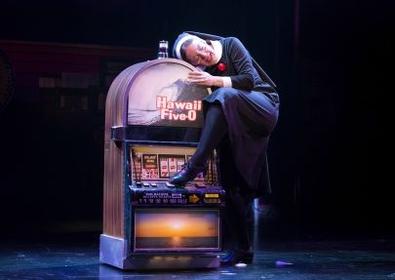 Jennifer Simard just earned the kind of rave reviews that every actor dreams of receiving for her work as a very odd nun in the Broadway musical spoof of 1970s disaster flicks, “Disaster!” Stealing every scene in which she appears from an entire cast made up of inveterate scene stealers—Roger Bart, Faith Prince, Kevin Chamberlin—Simard is giving a master class in musical comedy acting that everyone should race to see. She spoke to us about ruining auditions for a joke, playing a “sublime weirdo,” and her own fraught past with a nun.

Tell us about your role in “Disaster!”
Sister Mary Downey is a complex individual who is harboring a secret beneath her shy exterior. She has quite a bit of a darkness about her, and it’s fun to peel back those layers every night. My favorite things about her are the things we find least lovable about ourselves. The dark, nougat center. And Sister Mary is in conflict and has a lot she doesn’t love about herself. And it’s a joy to play this sublime weirdo. When the whole thing is over, I’m gonna miss her.

How did you get your Equity card?
I got cast in “Forbidden Broadway,” and it was a production where we rehearsed in New York City but we were opening the Stamford, Connecticut, production. And that’s how I moved to the city and got my Equity card in December 1992.

How do you typically prepare for an audition?
You have to prepare a much as you can to make it look as effortless and spontaneous as possible. Sometimes you’re not afforded that luxury. I almost prefer the last-minute audition because when that happens you tend to get out of your own way. If you do have a healthy amount of time to prepare—and by healthy I mean 48 hours or more—I think it’s important to get off book as much as possible, still holding your material so you can take the adjustments they may give you. There’s a lot of work that goes into making it look like it’s the first time you’ve read it.

What was your most memorable survival job?
When I worked in a mailroom with a nun. And she hated my guts. It was her gig for a long time and I was brought in to assist. I don’t think she intended to dislike me; she disliked the situation because she had it all figured out and then in comes me, this ambitious mailroom whippersnapper who just wanted enough money to buy makeup.

On whom do you currently have an acting crush?
Probably Bryan Cranston, because he’s equally at home with drama and comedy and such a phenomenal actor.

In the alternate universe in which you aren't an actor, what would you be doing?
I probably would want to be a writer. A successful writer, where I sell lots and lots of novels and I live in one of those mansions in Newport.

Which of your performances has left a lasting mark on you?
This one. I’ve said it before, but this is the last role my mom saw me perform before she passed away. She got to see me do it Off-Broadway. And it means the most to me for many reasons, but particularly that one. I desperately wish she were still here, in general of course but also to see this now. But I’m so grateful that she knew this character and how much I loved it.

What is your worst audition story?
I was auditioning for “Cry-Baby” a few years ago, for the role of Hatchet-Face. I auditioned and decided to make a joke in the room with the director, and wonderful, fabulous, sincere him thought I was serious. When he said, “Do you have any questions about the show?” I said, “Who” emphasis on the “who” so you’d know it was a joke—“is Hatchet-Face?” And then he very sincerely starts to tell me. And I just was like, Oh god, oh god, make it stop. If I could go back! And it just threw me for the rest of the audition. I felt like such an ass at the idea that he had to educate me as to who Hatchet-Face was!