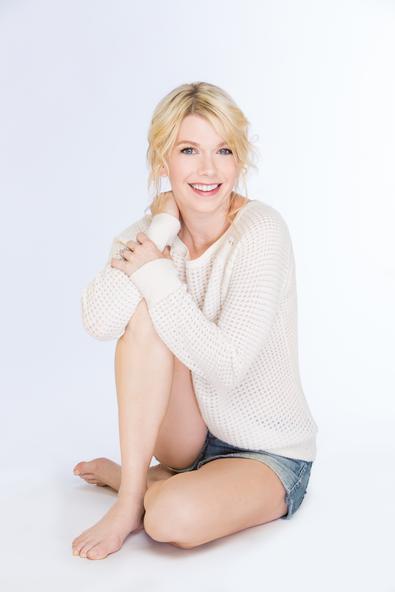 Mary Elizabeth Ellis may still be best known as the Waitress on “It’s Always Sunny in Philadelphia,” but she’s doing stellar work as Fred Savage’s wife and Rob Lowe’s sister-in-law on Fox’s “The Grinder,” neatly sidestepping the perils and pitfalls of playing the mother and wife on a sitcom.

Tell us about “The Grinder.”
Rob Lowe played a lawyer on television and quit at the height of his career to move back to Boise, Idaho, because he had a crisis of identity, and he moved in with his brother, Stewart, the guy who had to work hard for everything and who has a normal family. We’re that normal family; my character, Deb, is married to Stewart, and Stewart is Fred Savage. We have a lot of fun!

What has “The Grinder” taught you about your acting?
One thing I’ve really learned is trying to keep the bigger picture in mind. I feel like both myself and the creators of the show and the writers, everyone is trying to make sure that my character doesn’t become the typical television wife and mother. And so I feel like I’ve really learned to say, “Let’s look at this line,” and I’m lucky enough to work with showrunners who say, “Oh my God, of course, we ran out of time writing the scene and wanted to come back to it.” I feel like I’ve found my voice more.

How do you typically prepare for an audition?
If it’s pilot season it’s, “Hey, you have four auditions tomorrow, so here are 20 pages of sides you have to memorize.” And you work on it and do each thing and then you’re done with it and you move on to the next. If it’s a movie and it stands alone, it’s nice to have a little more time to work on stuff. And I studied theater in college, so every once in a while it’s nice to fall back on that work of intentions and what does my character want and what do I expect from the scene and how does that make me feel when I get what I want or I don’t get what I want? It’s also interesting to have a history in theater, because on [sitcom] “Perfect Couples,” on Episode 4 I was, like, “Guys, what’s her job?” And they were, like, “Oh no, she doesn’t have one until we write one.” I feel like that happens to people a lot in television, and for people trained in theater it is shocking that you’re reading a script and my character’s making out with a woman. “Is my character a lesbian? Great! I wish I had known before.”

How did you get your SAG-AFTRA card?
I got my SAG card doing “Cracking Up,” starring Molly Shannon on Fox. It didn’t go very long. It was a Mike White show. My husband, Charlie [Day], had been doing the Luis Guzmán show [“Luis”], so I had been at Fox a lot, going to tapings of stuff. I met Geraldine Leder, who was casting it, and Ann Maney, who used to run casting at Fox, and they were so lovely and gave me an opportunity to come in and audition. I came in and played Hot Girl No. 2—and Hot Girl No. 1 was Minka Kelly.

On whom do you have an acting crush?
I have always had an acting crush on Laurie Metcalf. I just did a play with her [“Trevor”] and she had to say, like, five times, “It’s your line.” I was, like, “I’m sorry, I was watching you act!”

What was your worst survival job?
I worked at the Olive Garden in Burbank for a while, and that was pretty soul-crushing. Also, we have a little boy and we just had his birthday party and we hired people who play pirates to come to the party. Everyone was like, “Oh my God, those people were amazing! Where did you find them?” And I was like, “I used to be a sword-fighting pirate at children’s birthday parties, so I just called the company I used to work at and they still do it.”

What is your worst audition horror story?
The audition that made me stop auditioning for commercials was an improvisation for a fast-food restaurant, where the guy playing my boyfriend and I were in rolling chairs. We were supposed to get our bag from the drive-through window, and I’d say something simple like, “Could we get more ketchup?” And another guy is supposed to slam into the back of our chair and yell, “Steakhouse!” I’m basically auditioning to be an extra. And we’re sitting and he takes the bag and he says, “If you order a Diet Coke again, I swear to God…” “Steakhouse!” Cut. And they give the steakhouse guy direction because that’s all they care about, and then they say to the other guy, “Hey, you’re on a first date. Instead of being aggressive, try to get in her pants.” And I’m like, “What? That’s your direction?” “And action!” And so he gets the bag and says, “So… what do you want to do after?” And “Steakhouse!” Cut. And I said, “Maybe I should just say the ketchup line they asked me to say?” “Action!” And he says, “Well, did you have something you wanted to say?” “Steakhouse!” And I thought, I’m done. I’m done auditioning for commercials—I never book them anyway!

Which of your performances has left a lasting mark on you?
I think they all do. It’s really fun to do “The Grinder” and make fun of the whole acting thing where Dean’s like, “I am Mitchard Grinder. And when Mitchard Grinder dies, a part of me dies.” And our characters are like, “So when you kill a fictional character, part of you dies as well?” And we’re laughing at it, but it kind of is true. You become this other person for a little while and channel the spirit of this person who isn’t you but is part of you. I feel like you’re always connected to the characters you play and you always learn something from the characters you play.