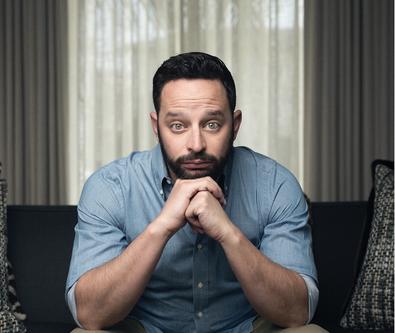 Gearing up for the seventh and final season of FXX’s “The League,”Nick Kroll reflects on his experience playing Rodney Ruxin, shares what he’s learned about himself since the show began in 2009, and tells us which TV performances he admires most!

Tell us about “The League.”
When you start as an actor, you can only hope you’ll be able to act at all—let alone on a show that lasts seven seasons. We were just talking about this the other day: In seven seasons, the cast has never had an internal fight. [And because there is a lot] of improv, it’s a real team game, so we’re always working and figuring things out together. It’s just a lovely group of people.

What have you learned about yourself over seven seasons?
If I want to take a nap at lunch, I like to eat my lunch right after my nap—that’s a big one. If I eat before, then I just lie down and it sits in me, and I wake up and I’m still tired. I’ve learned you’ve got to stay hydrated; you’ve just got to keep drinking water all day. And there are only so many almonds you can eat in a day before you start to get a stomachache. No, OK, as an actor, I think I’ve just gotten more comfortable being on camera and working with a crew, and hopefully I’ve just become a better co–cast member.

On whom do you have an acting crush?
Tatiana Maslany from “Orphan Black”—it’s incredibly impressive what she’s able to do on that show in differentiating the characters from one another; Danny McBride on “Eastbound & Down” as someone who was wholly unlikable and yet you still could identify with and root for was such an impressive comedic antihero; Jordan Peele and Keegan-Michael Key as sketch performers are both so unbelievably talented and versatile; [Elisabeth] Moss and Christina Hendricks on “Mad Men” [were so] expressive, and also muted and controlled, and just so fun to watch throughout the series; and Will Forte on “The Last Man on Earth,” because I look at it as people who are writing for themselves and helping to create. The performance is so fucking nuanced, funny, broad, specific, and committed.

How do you typically prepare for a role?
I like getting in the whole outfit. I find that getting into some version of the clothing that the character would wear is helpful. It’s a little tricky with auditions because you don’t want to be the idiot who shows up in the full costume, but even [then] I’ll try to show up somewhat in character. Once I’ve gotten the part and I start to get into the wardrobe, I find that, for me, that really, really informs what the character is going to be. And then figuring out the walk is really helpful as well.

Which of your performances has left a lasting mark on you?
I’ve never played a character as long as I’ve played Ruxin, and he’s wholly unlike me as a person...because I think he’s a vindictive, vengeful piece of garbage. But I think over seven seasons, and because of the amount of improvising we do, there is a lot of me in that character. I’ve been playing him on camera longer than anything I’ve ever done, so I think he’s left an impact—hopefully [not] psychologically, because if so, everyone’s in trouble.

What was your worst survival job?
I didn’t have any terrible survival jobs. The main job I had before I was able to transition over to acting full-time was working at an after-school program at a middle school teaching improv and standup. So even when I had a regular job, I was still lucky enough to be doing the stuff I loved in some way. It was hilarious that I was teaching a class on improv, because I barely knew what I was doing on my own. But sometimes teaching does help you clarify what you believe and how you want to do things, so it was pretty useful.

What’s your worst audition horror story?
This wasn’t an audition, but I did a Lipton Cup-a-Soup commercial, and it was one of five they shot over a few days. I was the last one on and it was like a 30-second monologue straight to camera, and I just couldn’t get the lines. I was just panicking and freaking out and kept fucking it up. I could just feel the whole crew getting so annoyed and bummed out, and it was a real bummer. It was the worst!