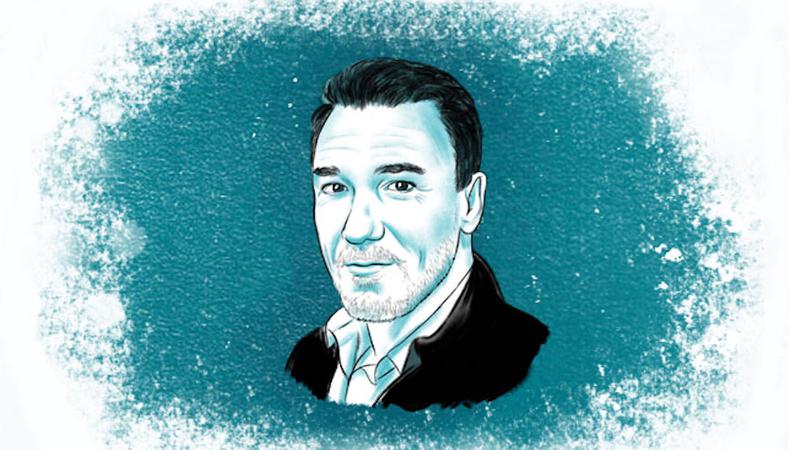 Patrick Page may be best known as the Green Goblin in Broadway’s “Spider-Man: Turn Off the Dark,” but his career encompasses everything from the classics to Shakespeare to his current Off-Broadway work on the folk opera “Hadestown,” at New York Theatre Workshop through July 31. We spoke to him just after a rehearsal about yelling for tips, audition advice, and required viewing.

Tell us about “Hadestown.”
My role is Hades, King of the Underworld. It’s a folk opera, basically a sung-through musical on the myth of Orpheus and Eurydice through an American folk lens. It’s fucking awesome! [It’s] based on an album by Anaïs Mitchell, which is really incredible. I listened to it and I was like, I have to do this piece.

What was your most memorable survival job?
I haven’t had a whole lot of survival jobs. [But I had] a theater job at a place in Oceano, California, called the Great American Melodrama, where we not only performed in these melodramas but we sold the beers and the tickets and the popcorn and swept the floors. And that paid something like $150 a week. I think I managed to get it up to $200 a week by directing as well. And we were so desperate for money that we found out if we yelled rather loudly, “Thank you for the tip,” we could get more tips.

How do you typically prepare for an audition?
The way I’d prepare for a scene, which is to try to find out everything going on with the character in the scene and learn the words as thoroughly as I can. If I haven’t learned the words, I haven’t spent enough time with the material. So usually it means I’ll be off-book. I’ll do a lot of whatever research is necessary, not only on the character and play but on the director and the creative team in general. Young actors nowadays can Google everybody, find interviews with them, hear them talking. That takes a lot of the fear out of it.

What’s your favorite song to sing at auditions?
It’s a great terror of mine and I was never any good at it. I’m always gobsmacked at people who are good at it. So I really don’t have one. The last singing audition I did was for “Spider-Man: Turn Off the Dark,” and I sang “Welcome to My Nightmare” by Alice Cooper, as if I was turning into the Green Goblin during the song.

What movie should every actor be required to see?
“The Godfather” and “The Godfather II,” in terms of American acting and where it came from—out of the Actors Studio, and how it grew to fruition with Marlon Brando and Al Pacino and Robert De Niro, who are all in these movies together.

What is your worst audition story?
One that I remember rather clearly is I was going in for the revival of “Evita” for Juan Perón and as I started walking into the room, I looked down and realized I had on one brown shoe and one black shoe. There was very little I could do about it at that moment. But that tends to throw you off.

On whom do you have an acting crush?
I’ve always had an acting crush on Frank Langella. He’s a real hero of mine, because he has genuine size and classical chops and is absolutely grounded in reality at the same time.

Which of your performances has left a lasting mark on you?
I really feel like the reason I became an actor and why so many of us stay in the business is because [with] every single role you do, you grow a little bit as a human being. The role I’ve loved playing for that reason was Cyrano de Bergerac. His completely uncompromising dedication to telling the truth and then the problem he finds himself in, being involved in this massive lie, I found I grew a lot exploring that dichotomy.

How did you get your Equity card?
I got it at the Pioneer Theatre Company in Salt Lake City in 1987, playing Horatio in “Hamlet.”

What advice would you give your younger self?
Talk less, smile more.