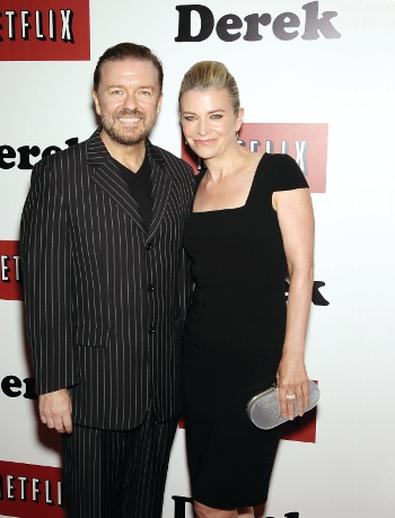 Backstage chats with Gervais, just nominated for a Golden Globe as leading actor in a television comedy, about his upcoming role in “Night at the Museum: Secret of the Tomb,” writing and starring on Netflix series “Derek,” and why, after all his success, he still feels like he’s getting away with something.

Tell us about your role as Dr. McPhee in “Night at the Museum: Secret of the Tomb.”
He’s a bumbling, pretentious, middle-aged man who wishes he was funny, wishes he was popular—and he isn’t, and that’s what I love. I love the excruciating social faux pas; I love pretension; I love ego. I love people trying to be things they’re not.... [“Night at the Museum” is] almost like a comedy job, and I was sort of hired to be a twisted version of myself. I’m not Pacino doing Corleone here. I put a dickey bow on and try and make Ben Stiller laugh—it’s pure fun and it’s a genuine role that I got that I didn’t write, and there’s very few of them.

What has been your most challenging role?
On every level, Derek. Writing it, acting it, doing everything for it. From the beginning to end, it had been stormy and challenging and exciting. Then it all comes out the other side and you sort of forget all that. It’s sort of been the hardest and most rewarding childbirth ever, I think. That’s a terrible metaphor. A fat, white, middle-class man going, “Well, it’s harder than childbirth, love! Absolutely awful! I’d love to see some of these women have to get into that cardigan every day and then tell me childbirth’s a problem.” Oh God. It’s going to be in one of those columns: “He said what?!” Yes, not only was it a rewarding birth, but it was baby Jesus that I gave birth to.

Which of your performances has left a lasting mark on you?
[Derek’s] the one that’s left an emotional scar on me and one that I’m proudest of as an actor and as a writer. I love him and love being him. David Brent [on “The Office”] and his legacy are big and it’s sort of given me everything, but everything being equal, I’d say Derek affects me most as an actor.

How did you get your SAG-AFTRA card?
I think if you write yourself a part and it goes on the BBC, someone sorts it out for you. I don’t know? I’m friends with Arnold Schwarzenegger, who sorted me out. That’s not true. I don’t know anyone! But I have got one!

What’s one thing you wish you knew before you started acting?
I don’t know that knowing things I know now would’ve made it better if I’d have known it then. Learning’s great and learning by mistakes is the most useful. I always first considered myself a writer-comedian—getting things off my chest and acting that well and building fiction. I only directed and produced to protect the writing and then I found that, well, I wrote this with my particular blend of inputs and I’m the best person for this role.

How do you typically prepare for a role?
You know when you hear about thieves complaining that gangsters stole their money? I feel that from actors who were really happy going to train for three years and then some idiot walks in and wins an award for it. I always feel like I’m getting away with something because I’m not really an actor for hire. When you create a character and you go, “Oh, there’s a part here for a Ricky Gervais–type character,” and then someone goes, “We should ask Ricky Gervais!” I’ve been offered biopics and stuff like that, but I explained to them that I’ll ruin their film! They wanted to me to do Churchill and I was thinking, “You need a real actor!”

I think most actors take roles because they think they won’t get offered another one that week or they’ve got to work every week of the year or they’re worried someone else will take it. I’ve never thought like that, and it is a luxury with what I do, but I’m never out of work because I write my own parts. A film’s gotta be amazing for me to take out six weeks when I could be creating something of my own. And I love acting, but I do feel I’ve taken someone else’s role, which is why I only take roles where I feel like it was sort of made for me or it’s written for me or I’m the best person for the job or they want me to ad lib through things—that’s why all the roles you’ve seen me in are very me. I’m no Daniel Day-Lewis. When he preps for a role, it’s for a huge film or he’s gotta be a chameleon, be someone else for three months—that’s preparing for a role. I feel I’m not qualified to say how I prepare for a role like you would ask De Niro, do you know what I mean? I prepare for roles I’ve written myself by writing them for myself, and I live with it for a year.

What’s your worst audition story?
I went along for a big advert campaign for a yogurt and they wanted comedians and actors who could improv and it would be a sort of fake, hidden-camera thing. And I’m on a busy shopping street and I’m going up to people and saying funny things about the yogurt. So I go along to do that and it was mildly embarrassing and they laughed and all that. So when I got there, first we’re in a corridor with about 10 other people. Horrible. Like, being treated like I’m trying to get into a country without papers. And I looked around and everyone else knew each other—it was all actors and comedians—and I sort of vaguely recognized some of them off the telly or I know so-and-so but I forgot his name. And they’re all talking to each other and they’re all bitching, saying how they hadn’t worked since January. I left it and said to my agent, “I’m never going to another audition—it’s too depressing. I don’t need the money, I don’t want the money, I’m never doing that again.” I hated it. I’ve either written myself a part or got offered a part.

Who do you have an acting crush on?
Dustin Hoffman. Remarkable. You’ve got those people who can do anything, like Daniel Day-Lewis, who can be anyone…he’s a chameleon—he can change his face, his hair, and [those actors are] great. And there’s the people like Dustin Hoffman who play it real; it’s their voice, it’s their way, their walk, and you get lost in every role. He’s been in most of my favorite films—“The Graduate,” “Marathon Man,” “Tootsie”—just remarkable pieces of acting. I like the gentle immersion of Hoffman into everything he’s done. I love his quiet charm and confidence, as well. I think deep down he knows he’s the best actor in the world and so that’s why there’s a little spark in his eye.

What was your worst survival job?
I’ve only had jobs before I was an actor, so they weren’t survival jobs. I’ve never had a break in doing what I do now because I’m doing three things at once. If I’m not doing a movie or my own thing, I’m writing another standup or another movie or promoting something. There is no break and there never has been. Before I was an actor, I had a normal job. I worked in an office for 10 years, but for that 10 years I wasn’t thinking, I’m going to write a sitcom about this one day and I’m just going to work in this office and then I’m going to become a Method actor! I wasn’t like, Right. I’m going to do this thing about the office but I need to do research for 10 years and no one will suspect me. It’s the greatest research role of all time! Isn’t that amazing?

So yeah, once I was in this business it was this business all the way. Oh, that’s awful. Every actor is going to hate me after this interview.

Briana Rodriguez
Briana is the Editor-in-Chief at Backstage. She oversees editorial operations and covers all things film and television. She's interested in stories about the creative process as experienced by women, people of color, and other marginalized communities. You can find her on Twitter @brirodriguez and on Instagram @thebrianarodriguez
END_OF_DOCUMENT_TOKEN_TO_BE_REPLACED