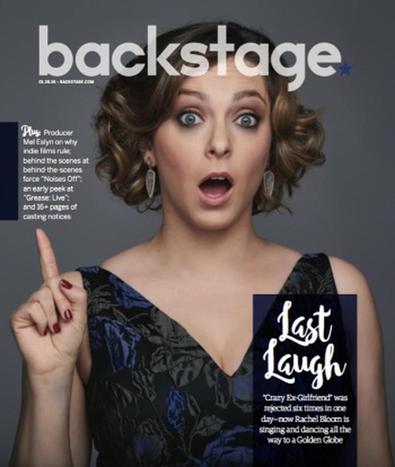 “It’s just such a funny scene!” she wails as she double clicks repeatedly. “I really want to show it to you!”

Anyone who’s familiar with Bloom’s viral YouTube music videos knows she’s adept at mixing sex, pop culture, and comedy—that was clear from her breakout song, “Fuck Me, Ray Bradbury.” (Just try to get it out of your head.) And her fan base is only growing since the premiere of her musical comedy “Crazy Ex-Girlfriend” on the CW last fall. Count the Hollywood Foreign Press Association among the besotted; they awarded her best actress in a comedy at the Golden Globes earlier this month for her performance as Rebecca Bunch, a high-powered Manhattan lawyer who runs into an old boyfriend on the street, promptly throws out her meds, and impulsively follows him across the country to his home in West Covina, California.

If the show’s small but intense following and the hail of critical hosannas (not to mention the CW’s massive publicity campaign) have helped catapult her into the national consciousness, getting “Crazy Ex-Girlfriend” made was a far wilder ride than Rebecca’s relocation to West Covina.

The project first began taking shape after one of Bloom’s videos, “If Disney Movies Were Historically Accurate,” popped up on
Jezebel.com, where it was seen by screenwriter Aline Brosh McKenna. An immediate admirer, McKenna reached out and set up a joint pitch meeting with CBS.

“I pitched two musical television shows that went bust,” Bloom says. “So at that point I was, like, Oh, another general meeting that will go nowhere.”

In a way, she was right. McKenna and Bloom turned out to be natural collaborators, but the network told her to be sure to write a character for herself in case the series needed a name for the lead. Faced with the prospect of hiring someone else to star on her series, the NYU grad turned to McKenna and asked if the series needed to be on a network. “She said, ‘Well, it would be a lot more money for you,’ ” Bloom says. “And I said, ‘Any money is a lot more money for me! Do you care about the money?’ She’s, like, ‘No, I’m not doing this for the money.’ And I said, ‘Neither am I. So let’s just make this a cable show where I don’t have to audition for my own fucking show.’ ”

Exit Showtime, which passed on the pilot the same week Bloom got married.

But Bloom, in person, is as doggedly optimistic as Rebecca (if far more down-to-earth). She knew what they had created was great; a few rejections weren’t going to convince her otherwise. So she and McKenna had the finished pilot sent to every major network they could think of while coming to terms with the possibility of the series dying. “To even get to the point where you have a half-hour pilot with a top-notch director—if nothing else came from this, the pilot would be a major step in my career,” she says.

As the rejections piled up, Bloom remained serenely confident in her abilities and in “Crazy Ex-Girlfriend.” But the series looked like a nonstarter until McKenna told Bloom to watch the CW’s “Jane The Virgin.” Intrigued by the show, they agreed to try a network again—and the CW loved it, saying it might be interested in it as a special event during the off season and would like some rewrites in a few months to turn it into an hourlong.

Bloom and McKenna returned to a feature film they had started, but Bloom decided to get the rewrites done early, forever proving that procrastination is never a good idea, because when the CW’s slate of potential pilots for the 2015–2016 season didn’t pan out, the network found itself in need of a series to announce at the May 2015 upfronts. A few more tweaks, and Bloom and McKenna found themselves celebrating a series pickup at Soho House. “A week before, my show was dead,” Bloom says. “A week after that, I am onstage at New York City Center in front of thousands of people, announcing my television series.”

Bloom and the show charmed everyone, though some potential viewers were put off by the show’s title. But, as Bloom points out, “Crazy Ex-Girlfriend” stems from its days as an edgier cable series. “Imagine for a second that the font is fucked up and you knew it was on a ‘dark, introspective’ cable network,” she says. “The title is such a stereotype, it’s like calling a show ‘Fat Gay Bitch.’ Either the show is going to be ‘Fat Gay Bitch’ or it’s going to be a guy dealing with the label fat, gay bitch. The whole premise of the show is that women are sold a bill of goods that love will solve all their problems. So from the beginning, we had such a feminist lens on it that we didn’t see the more obvious, which is, Oh, it’ll just be the thing the title is.”

Of course, anyone who has seen the show knows that the title isn’t misogynistic; against all odds, Rebecca and her ex, Josh, really do have a connection. And that connection became more and more pronounced as the actors found their roles. “Vince [Rodriguez III] is such a loving, warm person,” Bloom says. “Josh is this lovable, kind bro and the more we’ve written the show, the more we’ve seen that they’re both emotionally stunted. And there is a world in which they would go really well together. But we didn’t know about that until Vinnie started playing the role, and now we have a viable love triangle.”

The third side of that triangle is Santino Fontana as Josh’s friend Greg, who meets Rebecca at a bar and promptly says, “You’re smart, you’re pretty, and you’re ignoring me, so you’re just my type.” As he falls for Rebecca against his will, she’s not above pumping him for information about Josh—and sometimes, as in the case of the more explicit Showtime version of a scene, literally so. 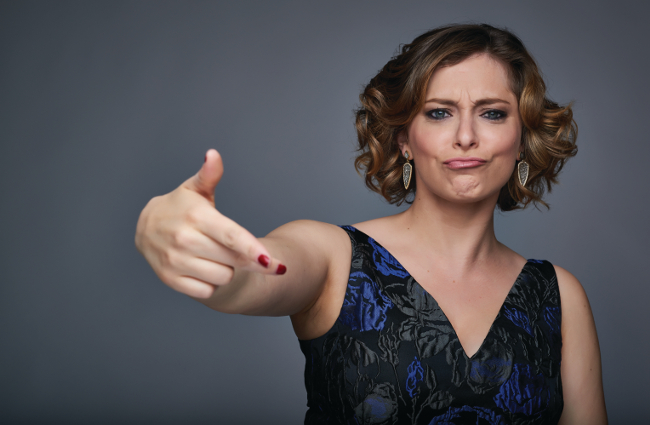 Greg may be the underdog, but he’s also a snippy one at times, particularly during the memorable Christmas/Hanukkah episode. “Greg is an alcoholic!” Bloom says, laughing. “We’re subverting the nice-guy trope and doing that partly because of what Santino brings to it. There’s definitely more of a ‘Pride and Prejudice’ thing going on we didn’t necessarily always have.”

Suddenly the episode loads, and Bloom, after some intense buffering and pleading with the Internet gods, finds the scene. She’s right; it’s almost ur-Rebecca and Greg: She grimly determined but trying (and failing) to hide it under a veneer of casualness, he trying to enjoy himself and ignore the huge warning flares being shot into the sky by her behavior.

But the real beauty of the scene is that it points out just how strong the show’s writing is—even without it, you know exactly who these characters are and what this world is. That's the crazy talent of Bloom and company at work.