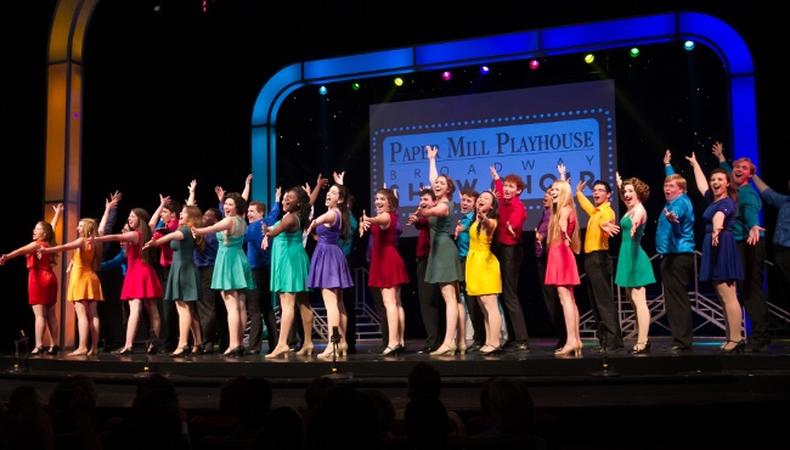 “It’s great to see how dedicated the kids are to this group,” said Publicity Coordinator and Show Choir Manager John Zeitoun about the group of 40. “They take it seriously because they love it, but at the same time it’s fun; it’s an extra outlet for them to express themselves, to continue to train, and to be inspired and surrounded by other kids their age who are passionate about the same thing.”

Although new, the BSC has already surpassed expectations. “We’d tried different public relations efforts to engage the community and to get our brand out there,” said Shayne Miller, the show choir’s director. “For many years we produced these giant events for the community where we’d have rides and games and live music, and it was fun but it didn’t really do anything for the brand. So we sat down and asked, ‘What are the elements that we’re missing?’ That’s when I came up with the idea for the Paper Mill Playhouse Broadway Show Choir.”

In addition to songs from classic musicals, the BSC also provides musical advertisements for Paper Mill by singing medleys inspired by the theater’s current shows. This year the group did “Grease,” and it’s already gearing up for next season’s “The Hunchback of Notre Dame” medley; it’s part of the theater’s marketing budget well spent.

The free, Paper Mill–sponsored, 10-month program not only assists the theater in spreading brand awareness but also provides resources for the performers who make it through the audition process. “They come in and they sing your typical 32 bars,” Miller said. “We teach the group a fairly simple dance combination...and then we do pretty extensive three- to four-hour callback auditions where we put groups of people together and we listen. By the end of the night we bring everyone together to sing this piece that they learned and everyone feels really good about the day even if they don’t get it.”

The BSC has reason to be selective—participants receive professional vocal coaching, dance training, and access to Paper Mill’s main-stage theater performances, in addition to exposure to tens of thousands of audience members. Some of those fans seem to be noticing and lending a hand.

According to Miller, Overlook Medical Center and Atlantic Health System have provided funding for the program’s upcoming year, and St. Stephen’s Episcopal Church in downtown Millburn has provided the choir with a practice and rehearsal space—ensuring that the Broadway Show Choir will continue humming along!

Briana Rodriguez
Briana is the Editor-in-Chief at Backstage. She oversees editorial operations and covers all things film and television. She's interested in stories about the creative process as experienced by women, people of color, and other marginalized communities. You can find her on Twitter @brirodriguez and on Instagram @thebrianarodriguez
END_OF_DOCUMENT_TOKEN_TO_BE_REPLACED