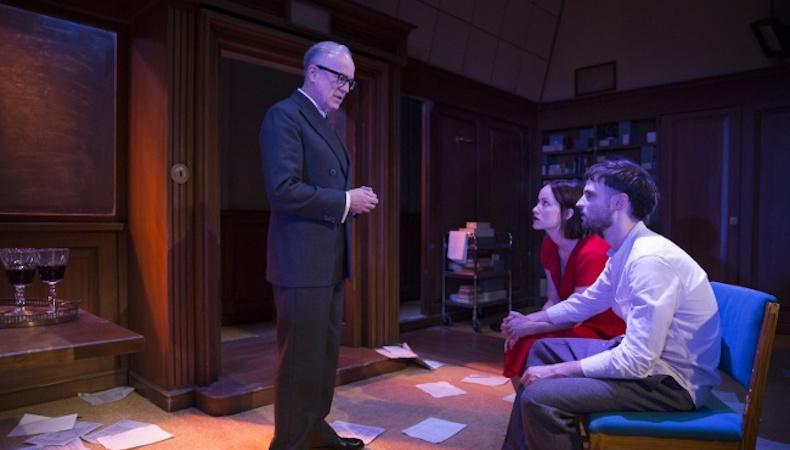 Reed Birney (“The Humans”) appears in two Emmy-nominated TV projects this year with “House of Cards” and “The Immortal Life of Henrietta Lacks,” in addition to starring back on the boards as the malevolent O’Brien in “1984.” He sat with Backstage July 20 to discuss bringing George Orwell’s prophetic novel to the stage and nailing the nuances of its resident villain.

‘1984’ has sadly gone from science fiction to documentary.
“It’s quite a cautionary tale, honestly, about what happens when citizens give up their individuality and their responsibility, and we certainly see it happen more and more every day. So I think it’s a wonderful time to be reminded about Orwell’s vision. One of the great paradoxes or ironies about our production is if someone had just written a play about a dystopian future, you’d accuse them of jumping on the bandwagon. But the fact that this is Orwell’s vision from 1948 is terrifying in its prescience. It’s more 1984 now than it was in 1984. I say when I read it in eighth grade it was science fiction, and now it’s documentary.”

To play evil, Birney had to be someone who believes he’s good.
“Since I’m playing the bad guy [O’Brien], I always like to think, How can I play against that? So I thought of O’Brien sort of as a camp counselor. I thought, Winston, you’re afraid of the water? Well, we’re going to teach you to swim this summer. It’s going to be great. That helped get me the part because the trap of the part is to play him sinister.”

Birney tried to quit acting after several years of no work.
“I tried to leave [the industry] several times—three times, actually. The last time was in ’94; I went to a career counselor who had successfully rehabilitated several of my actor friends, and I thought, Well, she’ll put my head on straight and I’ll do something else. And after three months, she said, ‘I’ve got bad news: You’re an actor.’ But I’m glad she convinced me to stay.”

Success comes after you commit to the craft.
“I think the truth is, you have to decide if you’re a lifer. If you’re a lifer, then you are an actor. And just like you are a man or a woman, you’re an actor, and then you don’t question that and you just know that that’s true. And then you find a way to act wherever you can.”

Birney had an epiphany that changed it all.
“The epiphany that I had in [2007] was [that] the dream of becoming successful and a movie star or whatever the dream once was is not going to happen. So I’ve got maybe 20 years left as an actor. From now on, it really has to be about: Is it a part I want to play? I can’t do things because I think that it’s a career move, because anytime I’ve done that, it’s been a catastrophe. So I just said, ‘I’ll continue to be poor, and I’ll just do plays and parts that are exciting to me.’ And within a year, I did ‘Blasted’ at Soho Rep, and that’s the thing that changed everything. Maybe there are people that are able to play the game in some sort of smart, crafty way. I certainly never was. And I think the truth is, you can’t really plan things like that because you just don’t know what’s coming your way.”