Regina Hall: A Comedy Queen Gets a New Perspective 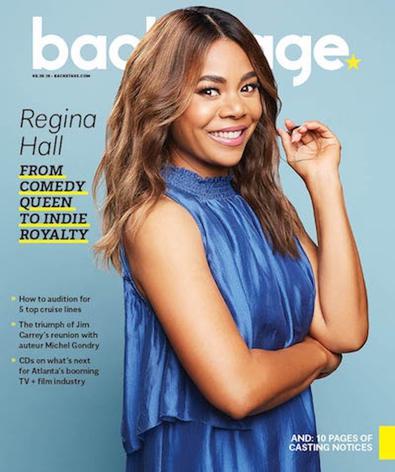 There were years when a young Regina Hall was still waiting for her big break. That major role. That blockbuster movie hit. That part that would irrevocably change her life. But as she takes stock of her now two-decades-long career, with the breakout success of one ensemble comedy fresh in people’s minds (“Girls Trip”) and the pending release of another in her own (“Support the Girls”), Hall is embracing the incremental nature of success.

“When you’re young, it’s good to never measure yourself to someone else,” she says. “It’s not a short race. It’s a marathon. You don’t have to rush to win. Or rush out of the gate. I thought there was gonna be this role that was gonna change my life. And that happens to some people, but that’s not my story. My career has always been steady. It’s never been one of those quantum leaps.”

Though not by leaps and bounds, Hall’s ascent is indisputable. Known for her scene-stealing performance as Brenda in the “Scary Movie” franchise, as well as parts in comedies like “Think Like a Man” and “The Best Man” (and their respective sequels), Hall is now comfortable recognizing that the best thing that ever happened to her is the work. And with Lisa, the humble and hardworking manager of a Hooters-like establishment in Andrew Bujalski’s “Support the Girls,” she’s finally getting the plum leading role she deserves.

“Lisa is not a role I would’ve thought about,” she confesses while sitting in a cabana at Brooklyn’s Royal Palms Shuffleboard Club. “But then you read it and...you have to do it.” In many ways, Bujalski’s film feels of a piece with Hall’s previous work: It’s an ensemble-driven story that gives the likes of Brooklyn Decker, Lea DeLaria, and up-and-comer Haley Lu Richardson the chance to shine. It straddles the line between comedy and drama, finding humor in a group of working-class women making the best of their jobs at a Texas sports bar called Double Whammies. But it is also a welcome departure, especially for the way it gives Hall an unassuming but deeply empathetic role that both anchors the story and provides her with a chance to showcase her range as an actor.

Trained as a journalist, the Washington, D.C.–born Hall admits her start as an actor wasn’t well thought out. That’s arguably what makes her career such a serendipitous gift; at first, she was merely trying to make some extra money, following the lead of a friend who was an actor. Hall found herself facing rejection after rejection, but while that would have disheartened someone else, the disappointments only served to confirm her commitment to this path.

“I couldn’t walk away from it. The fact that I was getting rejected and still trying made me realize it was something I wanted to do. That’s when I knew I was going to have to put the effort into it.” Because, as it turns out, she had no idea what she was doing. A naive Hall saw acting as something you just decided to do one day, on a whim, and then made happen. It took her time to realize that this was a profession like any other, one that not only rewarded but demanded hard work.

While rejection came to feel more familiar, auditioning is still a bit of a mystery to Hall: “I’ve had auditions that I thought I nailed and totally didn’t get. And then I’ve had ones where I thought I bombed and gotten it. So it’s a weird thing—you never know. But if you go into an audition and you’ve done what you wanted to do, even if you don’t get it, you’re OK with it.” To Hall, there’s no bigger disappointment than when you know you’ve failed yourself.

Once she began to look at full-time acting with respect—putting in the time before every casting call, studying, and eventually going to school for it—she immediately saw a change. Slowly, she started booking gigs, eventually landing a role (“I was either Street Hooker No. 1 or No. 2, I can’t remember”) in Wonsuk Chin’s supernatural drama “Too Tired to Die.” She may have only had a few lines, but the prospect of working on her first feature film—one headlined by recent Oscar winner Mira Sorvino, no less—was enough to excite her. And terrify her.

“The night before, I was filled with anxiety: Why did they hire me? I wish I hadn’t done this.” That feeling, she bemoans, has not gone away. “It’s probably the same every job. You always think, Well, I’m sure Meryl Streep doesn’t... But I always think that [way].”

The run-up to every new role remains fraught for Hall, and she’s candid about dreading prep work, acknowledging that the nitty-gritty of memorization still gives her a headache. “Any process is hard,” she notes. “But it’s like a puzzle. Once it fits together, it’s exciting. I think it’s the fear of every time I get a job I’m like, Oh, my god, I’m not gonna screw this up!”

But no matter how anxious she may feel heading into a new shoot or a new scene, it all melts away once they yell “Action!” Then, she’s totally present, indifferent to the many reservations she had going in, ready to get the job done and serve the scene and her co-stars as best as she can.

The sense that she’s most comfortable while on set comes through even as Hall reminisces about her experiences throughout the years. She beams when she talks about working with Keenen Ivory Wayans on the set of “Scary Movie” alongside Anna Faris: “What I got from him still serves me. It was a really good balance of ‘try anything’ but [also] ‘do this.’ He’s such an amazing director and I just treasured it.” And she lights up when she thinks of her fellow actors.

“My co-stars have been so much fun. I love the girls from ‘Girls Trip,’ and Anna [Faris] and I are still close. I’ve been really fortunate. Especially because in ensembles, it’s all about chemistry, and you want to be able to replicate it on- and offscreen. Though I did say one time to Anna, ‘Why is Cindy Brenda’s friend? She’s the most selfish friend! She just wished that you died! She wanted the monster to get you just to save herself!’ ”

Talk of her “Scary Movie” character, Brenda, the “extra-loud black girl,” as she lovingly refers to her, reminds Hall of the one piece of advice she wishes she could’ve given herself when that little spoof film became an unlikely box office hit. Patience, she muses, was the thing she should’ve nurtured more. While critics and audiences alike were dubbing her a comedian, Hall was itching to break away and tackle some more dramatic roles. She had never thought of herself as a comedian and feared getting pigeonholed with a label that never truly fit her.

“I don’t think I appreciated what I did then,” she says. “I thought, That’s fine, but I need a drama! I didn’t know that it could serve its own beautiful purpose.” She remembers looking at the careers of Jim Carrey, Eddie Murphy, and Martin Lawrence and thinking that the industry often dismissed their dramatic chops; that needless bias against comedy was something she’s learned to let go of. Now, she embraces the way she naturally gravitates toward—and thrives in—movies that have a lighter touch, even as she’s also charting more carefully the projects she chooses.

“That’s the great thing about youth: It makes you fearless! But as your career grows, you want to be part of movies that do well—you’re more aware of that, but that doesn’t always mean dollars. For ‘Support the Girls,’ I didn’t think about money, but I certainly thought that I wanted it to resonate. At the very least, you want it to sell. You don’t want to be sitting on it for six years like, Well, I guess no one is supporting these girls!”

If there’s one thing that defines her recent choices, it’s the commitment to nurture compassion. Above all, that’s what Lisa exemplifies in the film. The mothering kind, she’s ready to put her job on the line to set up an impromptu car wash to raise money for one of her “girls.” And with her can-do attitude, she models the kind of empathy toward her fellow Double Whammies employees she wants to see in the world. You can almost feel Hall uplifting this woman’s attributes and encouraging us all to follow suit. It’s also why the actor is terribly excited about finally unleashing “The Hate U Give,” based on the best-selling Black Lives Matter YA novel, onto the world later this year.

“It’s not an easy time in the planet right now. We need to do more than tolerate, we need love. Tolerance is the base beginning. I should more than tolerate you. I should embrace you. When you find a rare stone, you don’t throw it away; you take love where you can find it.”

Photographed by Emily Assiran on June 22 at Royal Palms in Brooklyn; Makeup by Rea Ann Silva