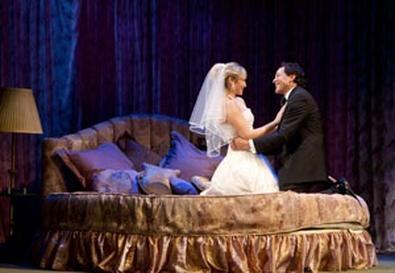 Photo Source: Joan Marcus
First the good news: Woody Allen is as funny as ever. His one-act play "Honeymoon Motel," the capper on an evening of three short works collectively titled "Relatively Speaking," has so many laughs packed into its 60 minutes that audiences had better make sure their health insurance is paid up. They'll need treatment for aching jaws and smarting bellies from laughing so hard. However, the preceding two pieces, Ethan Coen's "Talking Cure" and Elaine May's "George Is Dead," provide mixed results.

The evening's loose theme is the strained relations caused by families. Allen addresses the issue with his trademark zany edginess. As in his innumerable films, plays, and short New Yorker pieces, he sets up a twisted original premise and then wrings ingenious comic variations from it. The playlet takes place in set designer Santo Loquasto's sumptuously tacky honeymoon suite, where middle-aged author Jerry Spector and the nubile Nina Roth, with the predictable eagerness of newlyweds, are about to have sexual relations for the first time. All is not what it seems, however, and everyone affected by that fact soon barges in on the couple. The suite turns into a madhouse, with relatives, friends, a rabbi, a psychiatrist, and even a philosophical pizza delivery man crowding into the room and offering their two cents.

It's like an intellectual version of the famous stateroom scene from "A Night at the Opera," with opinions and perspectives crowding for space instead of the Marx Brothers and an endless procession of ship's personnel. Family members dredge up old grudges, while the rabbi and the analyst debate the existence of God and the validity of Freud's theories. "God exists; he just has attention deficit disorder" is just one of the hilarious zingers.

The earlier plays don't have as high a laugh quotient and suffer from inconsistent tone. Coen's "Talking Cure," a relatively brief curtain-raiser, is set in a mental institution and features a hostile patient named Larry arguing semantics and sanity with his doctor. Just as we discover that Larry is a postal employee with mother issues who has been locked up for assaulting a customer, the scene changes to Larry's cartoonish, monstrous parents bickering over a petty issue as he is about to be born. The two segments don't mesh, with the first feeling like recycled material from films Coen has made with his brother Joel (mysteriously menacing figures ready to unleash violence) and the second too reminiscent of Allen's cinematic leitmotif (Jewish parents viciously fighting about nothing).

Similarly, May's "George Is Dead" shifts gears halfway through and fails to find a consistent style. The corpse of the title is the husband of Doreen, a vacuous, spoiled rich woman who has never had to lift a finger in her life. So when she gets the news that her older spouse has been killed in a skiing accident, she runs to Carla, the daughter of her beloved nanny and the one who has cleaned up all of her messes. Carla has problems of her own, mainly her husband, Michael, a high school teacher, who is furious that his wife is spending all of her time taking care of her elderly mother, her drug-addict brother, and Doreen.

The opening scenes are a riot, with Carla barely suppressing her rage at Doreen's endless demands. As Carla, Lisa Emery gets considerable comic mileage from small actions, such as the furious way she scrapes salt off crackers for Marlo Thomas' endearing and infuriating Doreen. But then a blustering Grant Shaud, as Michael, enters and delivers a heavy-handed speech about the entitled wealthy, the failing political system, how texting is ruining education, and how America is becoming a reality show. May overloads her slight premise with too much symbolic baggage and it collapses.

There's plenty of laughter in "Relatively Speaking," and in spite of the show's shortcomings, you'll probably be seeing it on many regional theater rosters.