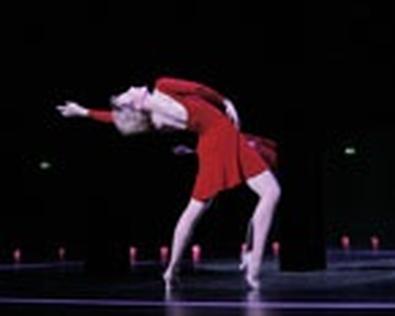 The revival of the 30-year-old musical A Chorus Line begs two questions: Is it too soon for a comeback (the original Broadway run ended in 1990), and is the show -- about dancers auditioning for, of course, a Broadway musical -- outdated?

The answers are no and no. The opening night crowd at the Curran Theatre started cheering the minute the lights came up, revealing dancers reflected in panels of gleaming upstage mirrors (scenic design, as in the original, by Robin Wagner). And that's despite a simultaneous earthquake, which went largely unnoticed.

The current and, as always, intermissionless production -- originally conceived, choreographed, and directed by Michael Bennett -- is directed here by Bob Avian (the original co-choreographer), with the choreography restaged by Baayork Lee, who was the assistant to Bennett and Avian as well as the original dance captain and the originator of the role of Connie. But the production wisely sticks to the tried and true: book (by James Kirkwood and Nicholas Dante), lyrics (by Edward Kleban), and, naturally, Marvin Hamlisch's catchy music. And despite certain textual references that place the show squarely in 1975, its humorous, compassionate look at a bevy of struggling young performers -- each taking the spotlight with a poignant, personal story -- remains timeless.

The show's such a charmer that it seems worth reviving if only for the songs. Among the standout numbers are the comical duet "Sing!," smartly performed by Chryssie Whitehead as the goofy, musically challenged Kristine and Tony Yazbeck, tender and supportive as her husband; and the show's famous ensemble piece, "One," which gets the full, lengthy, dramatic treatment that it deserves, enhanced by Tharon Musser's moody lighting (adapted from the original by Natasha Katz), Don Pippin's vocal arrangements, and Patrick Vaccariello's music direction.

In the key role of Cassie, as returned from a failed Hollywood career to bravely start over in the chorus line, Charlotte d'Amboise is electric. In a saucy red dress that contrasts nicely with the other women's assortment of skimpy leotards (costumes, again derived from the original, by Theoni V. Aldredge), d'Amboise throws everything into her impassioned solo "The Music and the Mirror," commanding the stage with exquisite dancing and a palpable sense of yearning. Altogether, the young hopefuls form an endearing ensemble, from Deidre Goodwin's proud, sensual Sheila, to Jason Tam's vulnerable Paul, to Natalie Cortez' Morales, whose forlorn and ultimately triumphant "Nothing" could be any actor's anthem.

Not that A Chorus Line is perfect. The lengthy beginning, as the auditioning dancers step forward to nervously identify and describe themselves to the director, is contrived, overly theatrical, and exacerbated by broad overacting. And Michael Berresse, as the director, is stiff and unconvincing as both a disembodied voice in the audience and in his onstage scenes. Other things that need fixing before the Broadway opening: over-orchestration that obliterates some of the lyrics; some full-cast choreography that's so chaotic as to be impenetrable. But those are minor flaws in an enormously captivating show.