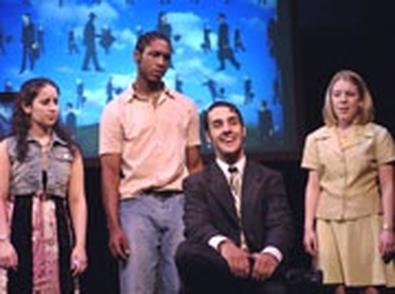 Let Freedom Ring! is a new revue that ought to be a musical. Subtitled "the social conscience of the American musical," the two-act show features some 40 songs that span 75 years of musical theatre history, underscoring the social consciences of the various composers and lyricists who wrote them.

Conceived by popular radio host Bill Rudman and playwright Eric Coble, the revue's potpourri of songs — the oldest was written in 1927, the newest was written in 2001 — deal with social issues like poverty, unemployment, war, women's rights, racism, and the economic gap between rich and poor. Featured composers and lyricists include Yip Harburg, George and Ira Gershwin, Stephen Sondheim, Frank Loesser, Jonathan Larson, and others.

Because it lacks a book, the amorphous plot is totally song-driven. It centers on a quartet of self-absorbed youngsters and an older man who awakens in them a sense of social consciousness. This is cabaret-style entertainment in which singing and choreography override story, dialogue, and character development. This is why the show, which is directed by Eric Schmiedl, works on the level of a revue, not a musical.

Yet there's always a feeling the creators have more to say. For example, a multimedia presentation includes pictorial video projections, both funny and serious, that give the witty and humorous lyrics even greater punch. There is also something of a tribute to Harburg, who has more representative songs than any other writer in the show.

Then there's the structure of the piece, which clusters the songs thematically, not chronologically. Songs about the gap between the rich and poor include a 1947 song, "When the Idle Poor Become the Idle Rich" (from Finian's Rainbow, lyrics by Harburg, music by Burton Lane) to "It's the Right Time to Be Rich" (written for the 1983 musical Doonesbury).

Songs about war, naturally, have the greatest impact — like the Gershwins' "Strike Up the Band," with prescient words about the folly of war having a sharp satirical ring, and "Bring All the Boys Back Home," written for the musical version of Two Gentlemen of Verona in 1972. Images of a shroud-covered coffin and war wounded reinforce the grim irony. While the songs from many decades are represented, the majority are drawn from the 1930s and 1960s, two eras when social activism infused the arts of the nation.

The four younger company members are all musical theatre students at Baldwin-Wallace College. All sing adequately, but none match the vocalism, power, and polish of Mick Houlahan, who gives the revue its oomph.

The title Let Freedom Ring! is derived from a Yip Harburg lyric for a song called "Freedom Is the Word" (also with music by Lane), written for a Broadway revue called Americana. It's an unabashedly patriotic song with a gospel feel that is echoed by the song that follows it: "Make Them Hear You" from Ragtime.

While the well-rounded selection of songs supports the concept of the American musical as a social document, the criticism is not with the production or the premise, but simply with the absence of a book. I hope the creators write one.