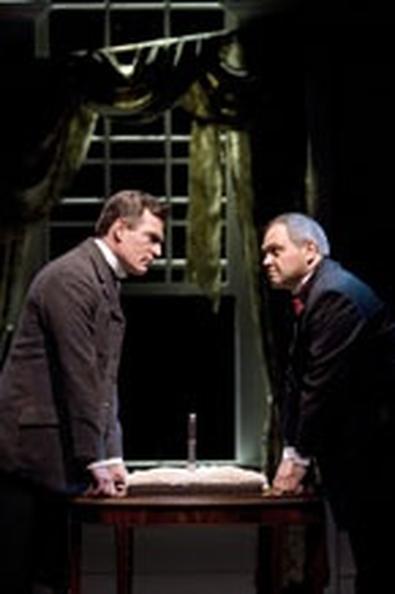 In his original plays and in those he adapts, Steven Dietz creates interesting worlds. As the unofficial playwright-in-residence of Arizona Theatre Company -- which is offering the sixth world premiere of his work -- Dietz has now conjured Victorian England and a tidy flat at 221B Baker Street. Sherlock Holmes: The Final Adventure, adapted from an 1899 play by Arthur Conan Doyle and William Gillette, contains a lot of little bits from many of Doyle's original stories and novels about the world's greatest detective.

Holmes (Mark Capri), his staid sidekick, Dr. Watson (Victor Talmadge), and his perfectly paired nemesis Professor Moriarty (Laurence Ballard) are universal characters that anyone can love. Familiarity with Holmes' great cases helps, but you don't have to be a scholar of detective stories to enjoy the script Dietz has crafted. There's just enough intrigue and adventure -- and even a touch of romance, with the inclusion of a woman who is Holmes' intellectual equal, Irene (Libby West). Director David Ira Goldstein keeps the episodic play moving briskly and includes a lot of flourishes to complement the plot.

The casting is also spot-on. Capri is a tall, lanky Holmes with a thoroughly British profile and a clipped speech pattern that makes the oft-portrayed detective his own. Talmadge must fight the general stuffiness that hangs on Dr. Watson, and he does a good job of making him an endearing narrator. Ballard's Moriarty is a good-natured, jocular creation, a wonderful choice to balance the malevolence of his motives. And West is truly enchanting as opera diva Irene; she has a strong presence and an easy way that make her a perfect foil for Capri and Ballard.

The rest of the ensemble also features several strong performers, including Roberto Guajardo as one of Moriarty's henchmen, Preston Maybank as a highly animated King of Bohemia, and Kenneth Merckx, Jr. as a double-dealing lawyer and confidence man.

Bill Forrester's elementary set does a solid job of establishing Victorian London, but it really shines when it turns into a gasworks and eventually into a very familiar treacherous waterfall. David Kay Mickelsen's costumes are wonderful, and there's one particular piece for Irene that is truly Victoria's secret.

Dietz and Arizona Theatre Company have created a fun evening that moves quickly and is guaranteed to please everyone who joins in the game.