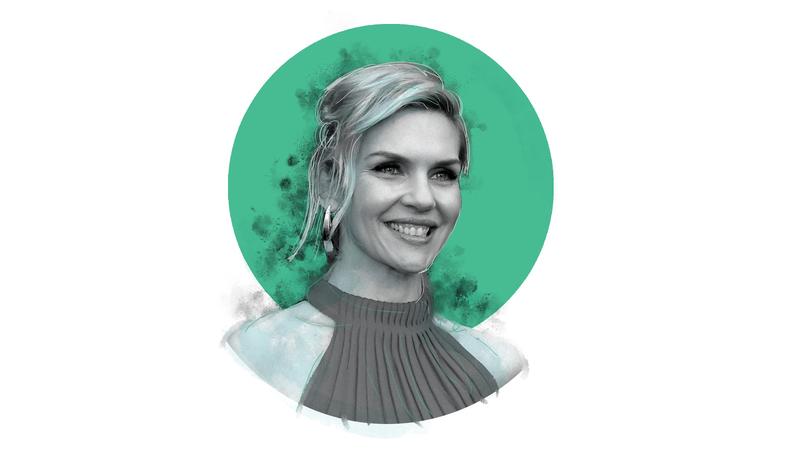 After a decade of auditioning for Bialy/Thomas & Associates, Rhea Seehorn finally booked a role for one of their projects: “Better Call Saul.” As the controlled attorney and love interest to Bob Odenkirk’s Jimmy McGill, Kim Wexler, Seehorn is a fan favorite—and, finally, at the top of many Emmy prediction lists.

What advice would you give your younger self?
I did not look the way a lot of leading ladies looked, and I didn’t look like a lot of the ingénues, so I played almost all character parts. At the time, I wasn’t really embraced with open arms for a wide range of roles. I had crew-cut, jet-black hair, and I loved that I was never cast as the attractive ingénue that had to play a romantic part. I was constantly the person who was the wackadoodle friend, or the person on drugs, or the person who was very unstable. Later, that stayed with me even as people started seeing the outside of me differently. The inside of me stayed the same; I was still taking risks because I didn’t need to fit into any box. Certainly, Kim Wexler is the female lead in our show, but times have changed (thank God) in television writing, so that’s not the shoebox it used to be. I think the advice for my younger self would’ve been to fully embrace where I was and to not worry about what anybody thought of me because it was serving me well. It was making me dig into everything about the job that I love and am still in love with, which is completely making up people and finding out what makes human beings tick and layering characters. That’s my favorite part of the job, and it has nothing to do with what people think about your packaging.

Did those risks push you to make stronger choices in auditions? What’s the craziest thing you ever did to get a role?
I find pushing for a positive objective is an extremely risky way to do comedy, which is surprising to people in the audience. From “I’m With Her” written by Chris Henchy and Marco Pennette, which was my very first sitcom, all the way up to my last sitcom, “Whitney” written by Whitney Cummings—both of those characters, even though they might seem like stock bitchy characters, because they were created by really smart comedic writers, they know there’s no longevity in that. That’s not an interesting human being. In that case, taking a risk was pushing myself to say, “Find a positive objective.” Looking for a positive objective when your character tells someone they look awful in their new pants, it can feel counterproductive. In your head, that action is to embarrass or to chastise. It’s infinitely not as interesting or funny as switching it to a positive objective like to help, to educate, or to befriend. The line comes out very imperceptibly differently, but it’s a funnier, more three-dimensional person than the former.

What is your worst audition horror story?
I had one where I found the character funny in this very offbeat way. It was fun for me to spin the lines, it was like she had other rules in her head that nobody else knew, so she had her own set of jokes she found amusing. I did the jokes they wrote, but I spun them as a person who was quite odd, and they didn’t enjoy that. And they let me know they didn’t enjoy it. I drove home thinking it was OK, because if I had had to do what I think they wanted, I wouldn’t have been the right person. I took such big risks on one that they actually thought I was ill or maybe had taken cold medicine, but they were all character choices. That was embarrassing. I was fine, but I took character choices that clearly didn’t go well.

You’ve said many casting directors have helped you along the way, can you talk about one that felt like a big break through?
Sharon Bialy, Sherry Thomas, and Russell Scott; they cast “Breaking Bad,” and they had seen probably a decade of my work here in Los Angeles in auditions. I’d never booked anything with them, but they called me in for dramas, dark dramas, dark comedies, light comedies, everything in between. I got to play a wide range of material for them that I didn’t ever get to do onscreen, but they saw all of it. And then they cast “Better Call Saul” and called me in for that role. I went in and I auditioned with a gazillion people and there were callbacks and then there was testing. But from the beginning, Sharon and Sherry, they told me it was my audition [that booked me the role] but also them knowing a 10-year body of work of mine that no one had ever seen. It made me cry when they told me that. I brought my A-plus game to every one of those auditions. It was work in a vacuum with these three lovely people and a video camera. To hear, 10 years later, that all of it mattered, that I would get a role like “Better Call Saul,” one of the best roles of my entire career, that it was partially based on them being able to see me as much more than what I’ve actually done onscreen—and they were able to talk about all of that based on what is, on paper, 10 years of failed auditions where I didn’t get the job.

What performance should every actor see and why?
Recently, the performances on “PEN15” blew me away because of the commitment and expert handling of tone, sincere versus comedic versus dramatic. Maya Erskine and Anna Konkle, they’re brilliant. Onstage, I know it was two years ago, but the entire cast of “The Humans.” They showcased what it means to hold the moment. Watching Reed Birney open the play; there’s a lot of hubbub of people talking and everyone leaves for a moment, and Reed Birney is there holding a grocery bag. And he’s looking at the audience. It’s probably 10 seconds, but it feels like a minute of silence of him staring. We as an audience are co-conspirators on an experience we don’t know yet. That’s how I feel as Kim Wexler all the time. I never thought I’d be able to get onscreen that magical feeling you feel onstage when you can hold an audience with your breath, but I do with her, because there are so many moments when they let me be in silence and the audience is my closest confidant.