What Richard Linklater Loves (and Hates) in His Actors 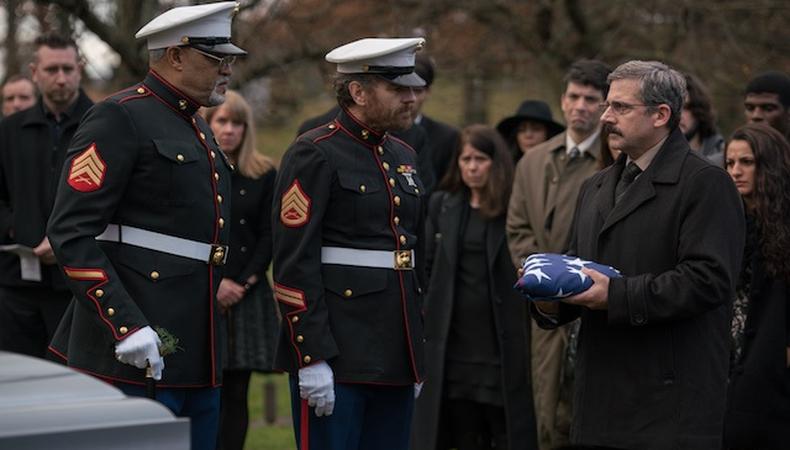 Richard Linklater’s films are presented with such hyperreal naturalism that some of his most memorable scenes are often mistaken for improvisation. Take his latest, “Last Flag Flying.” About midway through the feature, our trio of middle-aged Vietnam vets—Sal Nealon (Bryan Cranston), Reverend Richard Mueller (Laurence Fishburne), and Larry ‘Doc’ Shepherd (Steve Carell)—are sitting atop wooden crates and luggage in a train’s cargo hold. They’re on their way to New Hampshire to bury Doc’s son, a marine killed in Iraq. His coffin sits beside them.

While it’s a somber setting, it soon turns into a walk down memory lane between old friends, who were estranged for years prior to Doc showing up on their doorstep asking for aid. Hysterics ensue as the three vets verbally spar, sharing stories of their days at war and lacing them with jokes about aging and their bodies’ losing battle with gravity.

“I always said I wanted that to be my drunken John Cassavetes ‘real’ scene,” Linklater tells Backstage. “But it wasn’t. It was a fake drunken Cassavetes.” That’s because despite Linklater’s signature, near-cinéma vérité style, such realism was achieved between his actors after extended rehearsals, script analysis, and character development. The scene on the train was just the result of veteran actors being at the height of their game.

“My assistant editor says it’s unbelievable watching that footage come in and logging it because it was just take after take after take [of usable footage],” Linklater says. “That’s when you totally appreciate that professionalism, because some people only have one or two takes in them, [but] they can just find that energy and keep going and still hit that same peak each time. It was amazing to watch.”

That peak is reached after weeks of pre-production collaboration between actor and director. “You sit there and just kind of keep churning through the script scene by scene, everyday having some new ideas,” Linklater says. “I like it because I’m still figuring out what the movie wants to be via these people. It’s a conversation. I’m taking in their impressions, their questions. We’re all asking questions, we’re all feeling our way to the right [interpretation].”

The “Boyhood” Oscar nominee also points out, however, that not all actors appreciate working that way. While it’s the director’s job to keep “subtly steering that ship through those waters” in the right direction, some actors rely on the director to provide answers. Linklater doesn’t necessarily have them. He recalls working with Carell—who, he says, ultimately turned in a “sublime performance, so interior [and] great” as a grieving father and recent widower. Carell asked him early on in the process why, exactly, after years of losing touch with his war buddies does Doc track them down and ask them to join him to pick up and bury his son?

“I was like, ‘You know, I don’t really know,’ ” Linklater admits. “Most actors would run from a director who doesn’t have that answer, but I was like, ‘I think Doc’s being pulled by reasons he doesn’t even know.’ And Steve was like, ‘That’s good. That’s what I was thinking.’ He was kind of on that same wavelength—an ambiguous, kind of didn’t-have-the-answers approach that I like. I hate an actor [who’s like], I’m gonna hit this note and it’s gonna mean this, and I’m gonna hit that note and it’s gonna mean that. This wasn’t that. He was just feeling his way through it very specifically.”

One must wonder, then, what else Linklater likes in his actors. He recounts casting first-time and little-known actors for ensembles like “Dazed and Confused,” “School of Rock,” and “Everybody Wants Some!!” “With a youthful ensemble, because I’ve done a few, [I’m] just looking for distinct personalities who the camera loves and who can just be their own unique selves confidently,” he says. “In an ensemble, there’s an aesthetic quality—[we need] people who look different, too. So that’s the heartbreaking acting part: Of course it’s about acting ability and all that, but it’s just, ‘How is this group going to fit together?’

“And that continues through the rehearsal process.... They have to be in a team environment. We’re all going to play a role and make it a good ensemble piece. I’ve been very blessed [that] these movies felt very much [like] team efforts. That’s the most fun way to work.”

Ready to act on the big screen? Check out Backstage’s film audition listings!

Benjamin Lindsay
Benjamin Lindsay is managing editor at Backstage, where if you’re reading it in our magazine, he’s written or edited it first. He’s also producer and host of a number of our digital interview series, including our inaugural on-camera segment, Backstage Live.
END_OF_DOCUMENT_TOKEN_TO_BE_REPLACED