Rob Delaney on ‘Catastrophe,’ Writing vs. Producing + Why He Studied Musical Theater 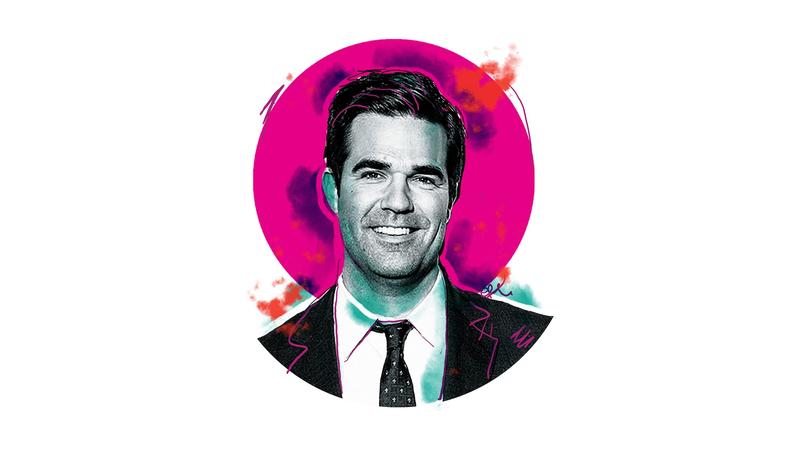 Rob Delaney is the co-creator and star of an Emmy-nominated TV series, has been named the funniest person on Twitter, and recently stole the show in “Deadpool 2.” Did you know he got his start in, of all things, musical theater? The Massachusetts-born, London-based writer-actor-comedian tells Backstage all about his early days studying acting at New York University, as well as his subsequent attachment (addiction!) to comedy. He also has choice words for his younger self, although his bumps along the way inform his and Sharon Horgan’s intimate family comedy “Catastrophe,” which aired its fourth, and sadly final, season on Amazon earlier this year.

Did you ever use Backstage, maybe while you were at NYU?
Oh, I sure did use the print edition of Backstage to look for auditions. I probably found the audition for the national tour of “Camelot” in there that I did, my first job when I graduated.

How did you first get your Equity and SAG-AFTRA cards?
My Equity card, that came from “The Sound of Music” at Westchester Broadway Theatre in 1999 or 2000. For SAG, I think I got grandfathered in? This was before SAG-AFTRA merged. I got my AFTRA card for being on “All My Children” a few times. I don’t exactly remember how it worked, but that allowed me to just get my SAG card.

Did you always want to do theater? When did the goal become comedy?
I wanted to be the best actor that I could be. So I thought, I should train my voice and body, and musical theater seemed like the way to do that. That was the motivation for studying musical theater [at NYU]. I thought I wanted to be an actor pretty much exclusively until senior year of college in 1998 when I went and saw the Upright Citizens Brigade do live improv comedy. From that moment on, I wanted to do comedy. For me, acting was like smoking a joint and live comedy onstage was a speedball of crack and heroin. And I always say: I want to be doing crack and heroin! And that’s my advice to young performers! No, I’m just kidding, definitely don’t do any of those things. A different way to say it would be, acting for me was playing catch with my neighbor, Jeff, and live comedy was playing in Game 7 of the 2004 American League championship series between the Red Sox and the Yankees. Obviously acting is great, and I still do it and love it. It’s a massive, massive privilege to do and I hope I can do it for the rest of my life, absolutely. But when it’s me making people laugh with stuff that I wrote, I enjoy that even more.

Would you ever do Broadway or the West End?
Yeah, definitely. I wouldn’t do it anytime too soon because of the age of my kids. They are very young and I like to be with them when I can. But yeah, someday, definitely. I want to do “Floyd Collins” or some cool, weird, little musical. It would definitely be a musical. If I’m going to be live in front of an audience, I’d want it to be mega-high octane, and that’s a musical. It wouldn’t be a straight play.

What’s your worst audition horror story?
One was for “Phantom of the Opera.” You had to do something from the show, and I forgot the words. And so I made some up! I thought that was terrifically funny, and they didn’t, believe it or not! Another bad one was this soap opera they shot in New York called “Passion.” For that audition I walked in and they literally looked at me, like, scanned my body up and down, and just went, “Thank you.”

So how do you handle rejection?
What I tell actors about that is, that type of rejection is legitimately brutal and it hurts. So you should stack the deck in your favor by making up your own stuff, you know? Auditioning for acting roles is gambling; gambling is crazy! That doesn’t mean don’t do it—I sure as hell still do it. But I also try to take control back by writing and producing my own stuff. Writing your own stuff, you have to practice to get good; producing my own stuff took some success to get to that point, but you’ve got to start somewhere, and like the vast majority of other performers in the world, nobody was itching to give me opportunities. So at a certain point I decided to create my own. And if that sounds scary to young people starting out, I promise it’s fun.

What’s the craziest thing you’ve ever done to get a role?
Probably the hardest I ever went for something was, there were two guys—this is gonna blow your mind—when I was in high school in Massachusetts, they had a furniture upholstery show on public television. And I found out they were going to be making a movie. And I wrote them a long letter about how much I love their show about furniture upholstery that my sister and I would watch. Now, in my defense, they did do little sketches and stuff and were very funny. But their show was called “Furniture To Go,” and I think that’s the only time I wrote a letter being like, “Guys, here’s the deal: I don’t know what story you’re trying to tell here but I know it would be served by being a part of it. I believe in your furniture slash comedy mission!”

What’s something you’ve learned about yourself as an actor, doing “Catastrophe”?
I’m very, very, very incredibly lucky that the thing that got me out there big time in front of the world was something that I wrote. For that reason it meant I was incredibly intimate with what I was saying, what I was talking about, why I cared about it, why I had to get these words out of me. It sort of organically made me do the work to deliver a good performance because I just had to so deeply believe and feel what I was saying. You can notice this a lot—musicals are a good example—you’ll see somebody who’s singing with a beautiful instrument, but they don’t necessarily know or understand what they’re talking about or why they’re saying it, they’re just singing it beautifully. And you would rather hear the person with sort of a strange voice or not the best instrument sing that song, tell that story, with conviction. That’s why, for example—God, I could talk about this for hours—that’s why Tom Cruise is super compelling to watch. People might be like, “Who’s your favorite actor?” Daniel Day-Lewis, of course he’s great. But Tom Cruise so fundamentally believes what he’s saying. He’s like, “Aliens are coming out of my nose!” And you’re like, “They must be! Look how much he believes! Aliens are absolutely coming out of his nose.” Tom Cruise, for me, is my favorite actor because he so inhabits what he’s doing and saying, and it doesn’t matter how weird it is. So don’t waste anyone’s time, your own or especially the audience’s, by having anything come out of your mouth you don’t totally believe.

What advice would you give your younger self?
Stop drinking and doing drugs right now, you are an alcoholic, you have a problem that will kill you if you don’t stop and it will massively derail your dreams for a good, long time. But also if you don’t, life will take its natural course and you’ll have to calm down, keep cool, collect yourself, stay sober, and in so doing, during that time you’ll meet your wife and have kids and amazing things will happen, so it kind of doesn’t matter! I know that’s contradictory. I’d just [say], “Be kind, work hard, have fun.” That’s what I would boil it all down to. I sometimes think about that because I had a significant detour in my career, but that detour led me to a richly experienced life and now all that life informs the stuff that I do. I never could have made “Catastrophe,” which, whether people like it or not, it is a heartfelt, genuine, intimate show written by people who earned that knowledge. You just don’t know what’s gonna happen. Be kind [because] you could get hit by a bus tomorrow. It takes just as much time to be nice as to be an asshole. Show up prepared. I can’t stress enough for young actors how important it is to be nice on a set and to be prepared. Some people don’t do that. I know that might be shocking to people who are fighting so hard to make a dream against all odds come true. You really differentiate yourself if you’re nice and attentive and helpful. All that Golden Rule stuff.

Jack Smart
Jack Smart is the awards editor at Backstage, where he covers all things Emmy, SAG, Oscar, and Tony Awards. He also produces and hosts Backstage’s awards podcast “In the Envelope” and has interviewed some of the biggest stars of stage and screen.
END_OF_DOCUMENT_TOKEN_TO_BE_REPLACED