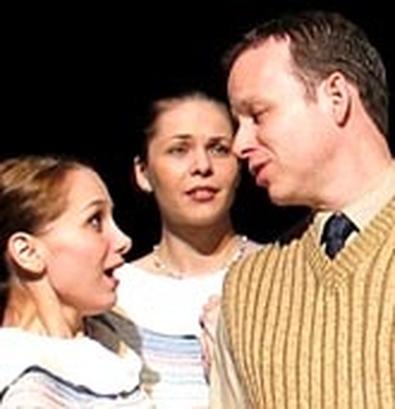 Jerome Kern's melodious 1933 ode to Paris fashion might seem an odd choice for the modest means of producer Mel Miller's enterprising company. How, for instance, could they pull off the fashion-show centerpiece? And how would Kern's especially lush melodies fare with only keyboard accompaniment, even when provided by seasoned music director James Stenborg?

Well enough, as it happens. With frequent director Thomas Sabella-Mills at the helm, this concert staging gives a good idea of what the show — as opposed to the more familiar and heavily revised movie versions — must have been like.

Curiously, ostensible leading man John doesn't get to sing as much as his bandleader pal Huck (the likable James Donegan in young Bob Hope's original role). Kern assigned Huck the romantic "You're Devastating," and Musicals Tonight! further allows him the lyrical "Lovely to Look At" (written for the 1935 film and used as the title of the 1952 remake), neither of which seems an ideal fit.

That fashion show, incidentally, is merely suggested off stage, but the front-and-center goings-on make for a pleasantly diverting two hours plus.

at the McGinn/Cazale Theatre, 2162 Broadway, NYC.