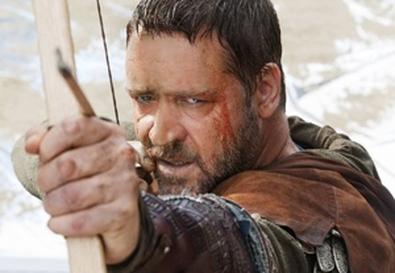 In the new "Robin Hood," Russell Crowe's iconic medieval hero wears no tights, shows little interest in redistribution of wealth, scarcely bothers with the Sheriff of Nottingham, fights alongside Maid -- sorry, Lady Marion and all but forces King John to sign the Magna Carta. In other words, director Ridley Scott and his producers were so determined this would not be your father's Robin Hood that a checklist of familiar incidents and legendary exploits to avoid must have been handed to writers Brian Helgeland (story and screenplay), Ethan Reiff and Cyrus Voris (story).

The result is less a Robin Hood story than an epic action movie that sees Crowe at the center of English history at the turn of the 13th century. It's "Gladiator" in Sherwood Forest -- only, for God's sake, don't mention Sherwood Forest either.

Scott supplies a supple visual design and terrific action choreography while Helgeland's screenplay conjures up robust characters that often lack dimension but make up for this with vigor. The film, which premieres Wednesday at the Festival de Cannes as the fest's opening movie, could be a crowd-pleaser. If that crowd extends from devotees of the Robin of Olde to teen action fans and admirers of Crowe and Cate Blanchett, Universal may have an international hit.

The film's hodgepodge approach suggests many rewrites to forge a new angle on Robin Hood plus a desire for the movie to play to many constituencies. So, understandably some things work better than others.

Its European history is so ludicrously mangled that one almost suspects Mel Brooks and Monty Python's Flying Circus lent a hand. But the Robin-Marion romance strongly holds the movie together while Scott's muscular direction and Marc Streitenfeld's brilliant score make this one of the fastest 140-minute movies you'll ever see.

The film's post-modern hero is Robin Longstride -- love that last name -- a sharpshooting archer in Richard the Lionheart's army as it pillages its way across France while returning from the bloody Third Crusade. Robin, a yeoman (or commoner), meets the lads that will one day be his Merry Men -- only please don't evoke that phrase -- while witnessing the death of his king (Danny Huston) and then a nobleman whose identity he assumes to escape across the Channel.

Determined to bring the dead man's sword back to his kin in Nottingham, Robin encounters the man's aging father, Sir Walter Loxley (Max von Sydow), and his comely daughter-in-law Marion (Cate Blanchett). It is Sir Walter's idea for Robin to continue in his guise as his son since the family may lose its 5,000 acres if his son's death becomes known. The old man also hints he knows the truth about Robin's late father, a repressed childhood memory for Robin.

Robin is thus swept up into the political struggles of 1199 England -- the conflicts between callow Prince John (Oscar Isaac, no model of subtlety here), who succeeds his brother Richard on the throne, and his rebellious barons and the French king, who sends a spy, the insidious Sir Godfrey (Mark Strong), to ferment division in England to ease the way for an invasion.

Heroes and villains align themselves without any likelihood of confusion, but you do wish Scott and Helgeland spent more time with Robin and Marion and less on politics. You'd like more scenes of them together pretending to be husband and wife while getting to know each other as man and woman.

Crowe's masculine swagger is certainly matched by Blanchett's feminine bravado. She's his match any day. This is the heart of the movie but it beats too faintly.

Perhaps this film downplays Friar Tuck (Mark Addy), the Sheriff of Nottingham (Matthew Macfadyen) and the Merry Men (Scott Grimes, Kevin Durand and Alan Doyle) at its peril. The scheming barons, royals and turncoats would be more at home in Blanchett's "Queen Elizabeth" series than a Robin Hood movie.

Yet Scott has an eye -- and it's a very good one -- for sieges of castles, charging horsemen, hand-to-hand combat, glistening swords arcing through the air and deadly arrows whistling toward helpless targets. Streitenfeld's full-bore, multi-theme score beautifully enhances the visual splendors in John Mathieson's graceful cinematography while the stunt work, CGI and visual effects are all first class.