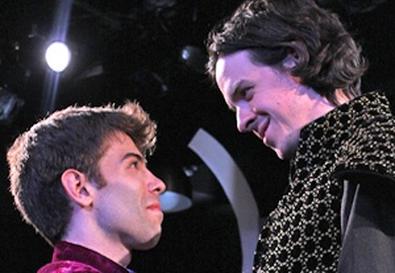 Photo Source: Gustavo Monroy
This Shakespearian mash-up of "Romeo and Juliet" and "Hamlet" is pretty witty and most definitely gay. Playwrights R. Jonathan Chapman and Kevin Stefan have come all the way from Calgary, Canada to see their cunning jape of a play produced as part of Gayfest NYC, which has rewarded them with a bright vest-pocket production under Sidney J. Burgoyne's confident and playful direction. To see or not to see? No question, the former.

In this version of the two stories, the House of Elsinore runs Verona, and Hamlet is betrothed to Juliet. Romeo crashes the ball at which the engagement is to be announced, spots Juliet, and is momentarily smitten. But she's talking with Hamlet at the time, and when the two men's eyes accidentally meet, all thoughts of heterosexuality incinerate. I won't detail any more of the goings-on, because half the fun is in how things happen and who gets reassigned which classic lines. Suffice it to say that Mercutio and Benvolio are both lesbians, as is Guildenstern, for whom Benvolio has a thing. Also on hand are Gertrude, Claudius, Rosencrantz, Friar Laurence, and the ghost of Hamlet's father. "To be a Montague" is community slang for gayness, which Gertrude, Claudius, and Juliet want none of. Will Juliet claim her uninclined prince? Will Friar Laurence risk performing a same-sex marriage? Will the forbidden lovers escape to register for flatware? So many questions.

The adorable Chris Bannow and dreamy Craig Wesley Divino make a handsome couple in the title roles. Divino's manly Hamlet isn't afraid to be sensitive, while Bannow's boyishness doesn't preclude strength. Along with everyone in the talented company, they handle the verse well and invest their roles with enough humanity to prevent the proceedings from turning into a mere cartoon. Ellen Adair is a fine and fiery Juliet, making much hay out of her "Get thee to a monastery" tirade at her suddenly gay betrothed.

Amy Jackson's butch Mercutio is buoyantly impish and a convincingly devoted comrade to lovely Eve Danzeisen's demure Benvolio. Maechi Aharanwa's mischievous Guildenstern is a good partner for Phillip Taratula's stolidly lower-class Rosencrantz. Kate Levy and Peter Reznikoff double effectively as Gertrude/Friar Laurence and Claudius/Ghost, playing the king and queen like a WASPy Upper East Side power couple. Reznikoff, who came late to the cast, was forced to carry some script pages toward the end of Act 2 at the performance attended, but it never affected his performance, except that he imaginatively used it for a couple of delicious comic bits.

Chapman and Stefan have had the nerve to write their own dialogue when needed to stitch everything together, and they pull off their faux Shakespeare with remarkable ease. They clearly love the Bard, and though the show is definitely a spoof, it never cheapens its source. Indeed, watching two men passionately play the balcony and bedroom scenes from "Romeo and Juliet," this gay man found his eyes getting dangerously moist. "Romeo and Hamlet" scores a palpable hit as much through heart as humor.