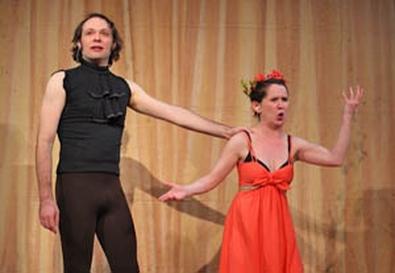 "What light through yonder window speaks? It is the East! And Juliet is the West!" Well, not quite. And really, that's the point, for in "Romeo and Juliet" from the Nature Theater of Oklahoma, we're not given a traditional production—or even a traditional nontraditional production—of the Shakespearean staple. Conceiver-directors Pavol Liska and Kelly Copper have asked friends and family to tell them the story, and from their remembrances, misremembrances, musings, and references comes a delightfully warm and funny evening that fosters more fondness for "Romeo and Juliet" than any other take I've seen.

These wonderfully varied conversations are presented as monologues, delivered by the spirited pair of Anne Gridley and Robert M. Johanson. Naturally, much humor derives from the confusion of basic details ("It happened in a town called Montague") and from idiosyncratic descriptions ("He's off brooding by himself—probably jacking off or something"). It's just as interesting, though, to see where the accounts dovetail. No one can seem to remember why the Capulets and the Montagues can't just get along, probably because Shakespeare never told us. Attempts to quote the text go awry in predictably funny fashion.

Thankfully, Liska and Copper succeed at making their "Romeo and Juliet" much, much more than a laugh at those who remember Shakespeare less well than we erudite theatergoers. This production has a generosity of spirit, appropriate not just at this time of year but to anyone thoughtful enough to engage in reconstructing a play he or she may not have read in decades. And surely much of the laughter comes from noticing our own fuzziness on certain details or realizing we may have summarized parts similarly in our heads ("And Juliet's father—who yelled at her, and called her a slut, and an idiot, and a bitch, just, you know, scenes before—is now really remorseful").

Gridley is game enough in her monologues, boldly sawing her hands and screwing her face to suggest the absurd theatricality most associate with Shakespeare. Never, though, does she improve the rich material; nor, truth be told, does she act between the lines. Johanson, by contrast, oozes offbeat intrigue. Looking and sounding a great deal like Tim Curry's Frank-N-Furter, he savors every moment with logically inappropriate, comically bravura grandeur. In particular, I treasured his overwrought creative pronunciations ("balcony" as "bal-CO-nee," "poison" as "POY-zee-uhn").

Enhancing the evening are a number of lovely details, including Peter Nigrini's tongue-in-cheek set design (think a high schooler's version of the Old Globe) and Copper's surprisingly sexy cameo. Can you call a woman in a chicken suit a lovely detail and surprisingly sexy? I think I just did.

Oh, and a note for you who clutch your coats and scoot to the edge of your seats as soon as the curtain falls: Don't be in such a rush this time. There's a simple, splendidly rewarding treat for those with a bit of patience.