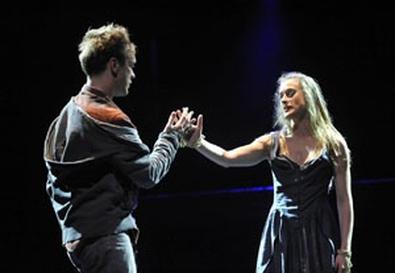 The action backstage rivaled the onstage theatrics at the performance I attended of the Royal Shakespeare Company's "Romeo and Juliet," part of the Lincoln Center Festival. More than halfway through this second production in the company's ambitious five-play repertory, the stage manager announced that the actor playing Romeo (Sam Troughton) had suffered an injury and his understudy (Dyfan Dwyfor) would be going on in his place after an early intermission for a quick put-in rehearsal. Fortunately, a powerhouse cast, including the resourceful and impassioned Dwyfor, and Rupert Goold's masterful and innovative staging survived the unexpected change.

At first, Goold's concept appears gimmicky and forced. Designer Tom Scutt has transformed the Park Avenue Armory into an Italian cathedral. The actor who later turns up as the Nurse (Noma Dumezweni) enters dressed as a tour guide. After she makes the expected announcement about turning off cell phones, a young tourist in contemporary clothes enters. She hands him an audiocassette guide. When he puts on the headphones and presses the play button, we hear the chorus's opening lines in Shakespeare's tragedy of young love, and the tourist enters 16th-century Verona as Romeo. While Scutt has costumed the rest of the company in Elizabethan garb, Romeo and Juliet wear modern dress. Somehow, this conceit works, stressing the unique connection between the lovers and their outsider status in a hostile, antiquated environment. There are other odd intrusions from the 21st century—Romeo rides a bicycle and takes pictures of the audience with a digital camera—but these anachronistic touches are slyly inserted and taken as natural by the characters and therefore don't stick out like sore thumbs. In the final graveyard scene, we are dramatically brought back to the present in a heartbreaking coup de théâtre.

In addition to this juxtaposition of eras, Goold employs a fascinating recurring theme: fire. Taking his cue from the Bard's numerous references to the heat and brevity of amorous passions, flames are everywhere, from Scutt's sun-flecked masks for the ball scenes to Lorna Heavey's blazing videos and projections to Howard Harrison's fiery lighting. Torches are used as weapons during fight director Terry King's pulse-pounding battles between the Montagues and the Capulets. The jittery Mercutio plays with matches and, before confronting her daughter, Lady Capulet nervously lights a cigarette.

Fire is also delivered in the lead performances of Troughton—and Dwyfor—and Mariah Gale. The actors remember that the titular lovers are teenagers, impulsively rushing where their hearts and hormones lead them and leaving the thinking to the grownups. Dressed in a hoodie jacket and sneakers, Gale's Juliet transforms from bored child to decisive wife but retains the spark of girlhood as the character dives headlong toward maturity. In one of the most memorable scenes, Juliet discovers a candy bar in a jacket left by Romeo. The expression of pure joy on Gale's face as she munches on the treat is worth the price of admission. Although I only saw half of his performance, Troughton gave full vent to Romeo's exuberance at the discovery of first love, while Dwyfor forcefully conveyed the hero's anguish as the unforgiving world intrudes on that passion.