Rumorville: Disney+ Is Developing a Musical Film Adaptation of ‘Once On This Island’ + More To Watch 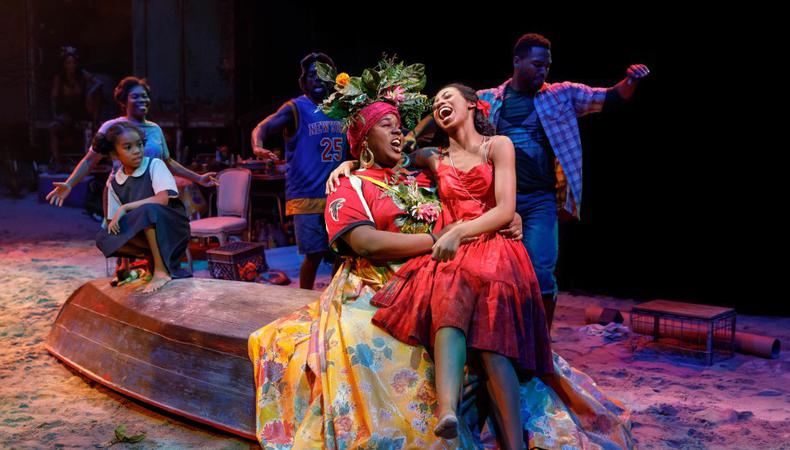 “Once On This Island”
Ask and mama will provide! First reported by The Hollywood Reporter, Disney+, currently still reveling in the release of “Hamilton,” is now developing a feature-length musical film adaptation of “Once on This Island.” The Lynn Ahrens and Stephen Flaherty musical most recently appeared on a New York stage in 2017 at Broadway’s Circle in the Square, winning the Tony Award for Best Revival of a Musical. Playwright Jocelyn Bioh (“School Girls; or, the African Mean Girls Play”) and director Wanuri Kahiu (“Rafiki”) will adapt and helm the project, respectively. Marc Platt, the award-winning producer of “Wicked” on Broadway, as well as the films “Legally Blonde,” “La La Land,” and more, will produce. No casting has been announced, though “Once On This Island” fans might be keeping their fingers crossed to see the return of breakout Alex Newell in the role of Asaka. It’s a safe bet to keep an eye on casting team Telsey + Company, especially considering they’ve cast the stage revival in 2017 and have been responsible for several recent Disney projects, such as “Mary Poppins Returns,” as well.

“Hannibal”
If you’re among the many that have been binging “Hannibal” on Netflix since it started streaming last month, you may soon be in luck if you’re looking for more material. In a recent interview with Collider, showrunner and series creator Bryan Fuller, who has already been long-outspoken about his desire to make a fourth season of the series (or even a movie), is fueling the flame once more. Says Fuller, “What I love about Netflix platforming the show now is there’s an opportunity for it to be seen as a Netflix show and maybe that will reconfigure their appetite, so to speak. But nobody has said anything to me, and believe me… They know I’m ready.” This is, of course, not a commitment or even the path to commitment for Netflix to revive the dormant NBC series, but it does offer some hope for “Hannibal” fans, considering the streamer has done the same for many other previous series, including “Arrested Development,” “Lucifer,” and more. Marc Hirschfeld and Robin D. Cook were the casting directors on the first three seasons.

“Man in the Box”
Billy Eichner will head in from the street with his next project. The comedian-actor and producer Tom McNulty are reportedly developing “Man in the Box,” a biopic based on the life of TV icon Paul Lynde. According to a Q&A with Deadline, Eichner and McNulty have optioned a script and are currently meeting with creatives to round out the rest of the production team. If all goes according to plan, this will be a vehicle for Eichner to star. Says Eichner, he’s most interested in the project to show how little things have actually changed for gay actors in that they are “hardly ever…allowed to play [their] own gay icons.” No additional casting has been announced.

“The Tender Bar”
After finishing production on his recent film “Midnight Sky,” George Clooney is reportedly in negotiations to direct and produce the Amazon Studios feature “The Tender Bar” from a script penned by William Monahan. If the deal closes, according to Deadline, Clooney and Grant Heslov would produce through their Smokehouse Pictures banner along with Ted Hope. The story is based on the J.R. Moehringer memoir about growing up in Long Island and seeking out father figures among the patrons at his uncle’s bar. Amazon has no comment, but considering the film has already moved from Sony to Amazon, the studio seems to be trying to get it made as soon as possible, and with a big name like Clooney, it’s likely to happen. Clooney always works with different casting directors on his projects, so be sure to track this project for more information down the line.