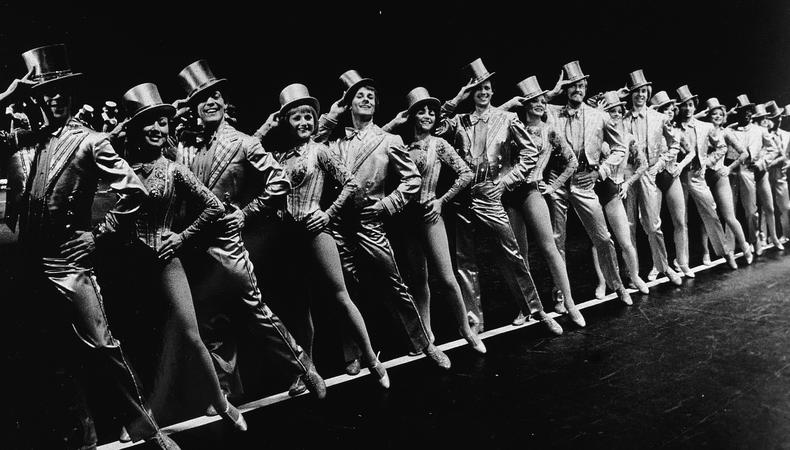 Photo Source: Museum of the City of New York/Getty Images

“A Chorus Line”
Ryan Murphy is continuing to be one singular sensation when it comes to stage-to-screen adaptations. In a recent interview with Deadline, the prolific creator and Netflix are currently working on a limited series adaptation of the hit musical “A Chorus Line.” The news actually dropped last September that he and the streamer would be working on the project as part of his deal with them, but he had received no further updates since then. The series will have both elements of the actual musical as well as a look behind the musical and how director Michael Bennett put it all together, starting with the interview sessions Bennett conducted, which Murphy now reportedly has the rights to, and which became the inspiration for the songs in the award-winning show. Murphy and Netflix say work hasn’t started on that yet but will next year. In the meantime, he’s busy with several other musical projects, including “The Prom” which will be released in December, and a new musical with “The Inheritance” writer Matthew Lopez called “The Legend of Georgia McBride.” Look to his recent “The Prom” and “Pose” casting director and Netflix veteran Alexa L. Fogel to conduct the casting for “A Chorus Line” or his regulars Ulrich/Dawson/Kritzer.

“Fantastic Beasts 3”
Fantastic beasts are not all we’re trying to find now. The “Harry Potter” spinoff film series “Fantastic Beasts and Where to Find Them” is seeking a replacement for Johnny Depp’s role of the dark wizard Gellert Grindelwald in the series’ third film. Warner Bros. asked Depp to “resign” from his role in the future film after very public allegations and legal troubles with his ex-wife. Now, as first reported by Deadline, “Hannibal” star Mads Mikkelsen is in early talks to take over the role. Casting will likely be moving quickly on the replacement as “Fantastic Beasts 3” is currently in production in the U.K. The film is scheduled to open on July 15, 2022. Fiona Weir is the franchise casting director.

“Ambulance”
Weeding through a long list of potential action-packed projects, Michael Bay may have found his next movie. The famed director will direct the action-thriller “Ambulance” and has begun eyeing his star for the role: Jake Gyllenhaal. According to Deadline, Gyllenhaal is in negotiations to lead the cast on the film, which Bay has reportedly fast-tracked and is now talking to other undisclosed actors. Written by Chris Fedak and based on the original Danish film “Ambulancen” and is said to be in the vein of 1990s action-thrillers like “Speed” and “Bad Boys.” Bay is aiming to begin filming in January. His usual casting director is Denise Chamian so be sure to keep an eye on her office around the beginning of the year for potential calls.

“Scorpion King”
Will the “Scorpion King” retake its throne? First reported by Deadline, Universal Pictures and Dwayne Johnson and Dany Garcia’s Seven Bucks Productions are hoping to reboot the movie with Jonathan Herman (“Straight Outta Compton”) writing the script. Says Johnson, “The Scorpion King was my very first role ever on the silver screen and I’m honored and excited to reimagine and deliver this cool mythology to a whole new generation.” There’s no word yet if the actor would reprise his role or even make an appearance in the film, though sources close to the project say it isn’t likely, especially with his busy schedule. In addition to “Straight Outta Compton,” Herman is working on the thriller “The Travelers,” “Bloodlines” starring Channing Tatum, and the upcoming “Fear” and “Scarface” remakes. No production timeline for “Scorpion King” has been announced.