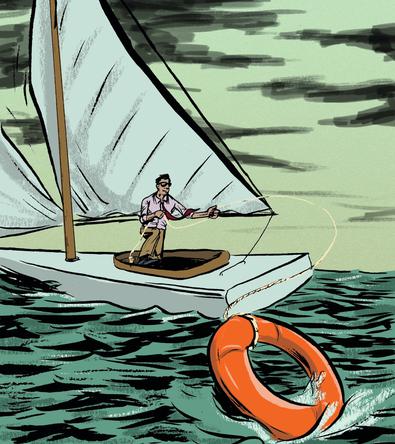 As an agent, I can’t teach you how to be a better actor. That’s not my thing. But I am definitely your man if you want to be a smarter actor.

The business side of your career can be tricky to navigate. There are dangers and frustrations lurking behind every corner. So the trick is to get past them in one piece.

To that end, I now present you with the six golden rules I believe will serve you well:

1) Everyone is out for themselves. The only person who is really looking out for you is you. Agents and managers don’t sign actors because they want the pleasure of their company, they do it because they believe they can make money by representing them. And that’s fine, but it would be a mistake to trust anyone completely and blindly with your career. Every decision is and should be up to you.

2) Hold on to your money. Pilot season seminars taught by actors who have never tested on a pilot. Workshops designed to help you find your brand. Classes on how to become a social media superstar. These are just a few of the ways you can throw out your hard-earned cash. Be very, very selective about how you allocate your funds.

3) Think before you speak. Creative people often speak impulsively, but that’s not a smart move when you’re in a business setting. I’ve had actors come in for meetings and shoot themselves in the foot by revealing negatives that convince me not to sign them. One guy confessed he was inherently lazy, the last thing an agent wants to hear. Another cracked a joke that was borderline racist. And just last week, a casting friend told me a horror story about an actor who made negative comments about the script during his audition, not realizing the writer was sitting 10 feet away.

4) Don’t let rejection get you down. I’ve been an agent for almost 10 years now, and during that time I’ve worked at two companies. That means I’ve only had to endure two job interviews during the last decade. But if you understand that every audition is like a job interview, the average actor probably had hundreds of auditions during that same decade. So you have to accept that a large part of your life will be spent getting rejected for random reasons while you wait for the right opportunity to come along. That’s just the nature of the beast.

5) Think long-term. Let me ask you a question: Will the world end if one of these things happen? 1) Your play gets bad reviews. 2) You tank at an audition. 3) Your agent drops you. The answer is no, of course not. That’s why you have to keep your eye on the big picture. If you only focus on the immediate setback—and there will be many—you’ll end up going mad.

6) Stay positive. Neuroscience has proven that only 10 percent of your long-term happiness is predicted by the external world. Ninety percent is determined by how your brain processes the world you find yourself in. So don’t focus on the negative. Train yourself to see the positive in every situation. Remember: You always have a choice, and the conscious brain can only hold one thought at a time. Choose a positive thought.