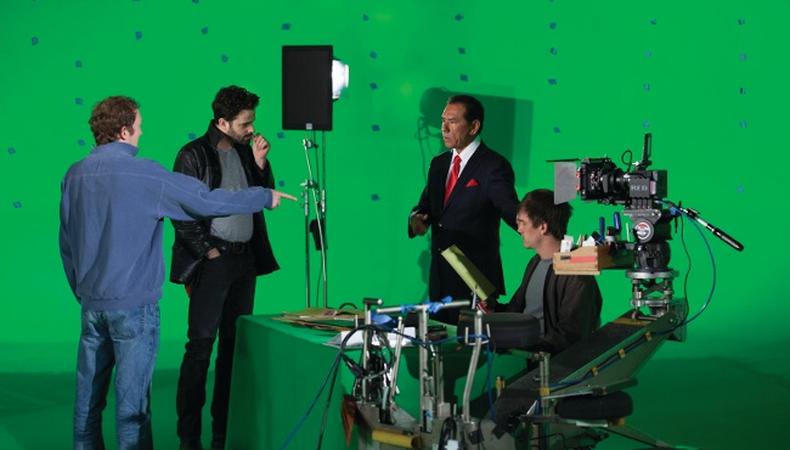 Amid the mountains, clean air, history, and green chili of Santa Fe, N.M., is a small yet powerful film school that’s taking things to the next level in terms of community and skill.

The Film School at the Santa Fe University of Art and Design is a mecca of opportunity for its students and staff. With a professional filmmaking studio in the same building, several businesses on campus, established filmmakers teaching an evolving curriculum, and the opportunity to be awarded a scholarship by Robert Redford, the school is overflowing with career possibilities for students. And incoming freshmen are provided with free DSLR cameras that are theirs to keep.

Yes, the Camera in Every Hand program does exactly what it seems, designed “for the student to say, ‘OK, I’m going to take care of this camera and learn this piece of equipment better than I would if I just checked it out,’ ” says Chris Eyre, chair of the Film School, adding that giving away the cameras is an investment in the students.

But that’s just the beginning. With Garson Studios in the same building, students are given the chance to intern on real-world professional sets, from films like “True Grit” and “No Country for Old Men” to the A&E series “Longmire.” “Longmire,” now heading back to Garson for its third season, not only employs the students as interns but also as paid art department staff, says Paula Amanda, associate chair of the Film School and director of Garson Studios.

“These are experiences that are very difficult to come by in most schools,” she says, “but we’ve got our young people now actually working in the industry and being paid.” Another production—a Lionsgate series—will be filming at Garson as well, building its set on campus.

With 220 students in the Film School, “I think the hands-on nature of what we do really can’t be beat,” says professor Terry Borst. “Our classes are small; our students work very closely with full-time faculty and then are intersecting, interacting, and networking with professionals throughout the entirety of their studies.”

Some of those professionals are part of what the school calls the FilmBizHub. Amanda says that when she noticed some unoccupied offices in the school’s building, she thought bringing in New Mexico film businesses would be a great way to utilize the space. Now the offices house five businesses, including a casting agency, a high-end animation editing and game design company, and a creative agency—each of them using students as interns and “now hiring our students on commercial jobs,” says Amanda.

But these businesses don’t just benefit those studying film. As part of the agreement with the casting agency, Amanda says, “We do an open casting call campuswide,” providing theater and acting students and staff with audition opportunities and experience. “Longmire” looks to students and staff for background casting as well.

And though Eyre says Santa Fe attracts a certain type of person, once those people are there—with open minds and the eagerness to work and learn—that tight-knit community can thrive.

“There’s no point in encouraging someone to move here if they don’t get it,” says Amanda. “People who haven’t been here have a whole different view that we’re in the desert, that it’s really hot—all of those things, but it’s not.”

Borst adds, “If you’re the type of person that is OK with a little stillness, is OK with spending time in nature, and is OK with cocooning to some degree in order to develop your vision and talent, this is an incredible place to be.”