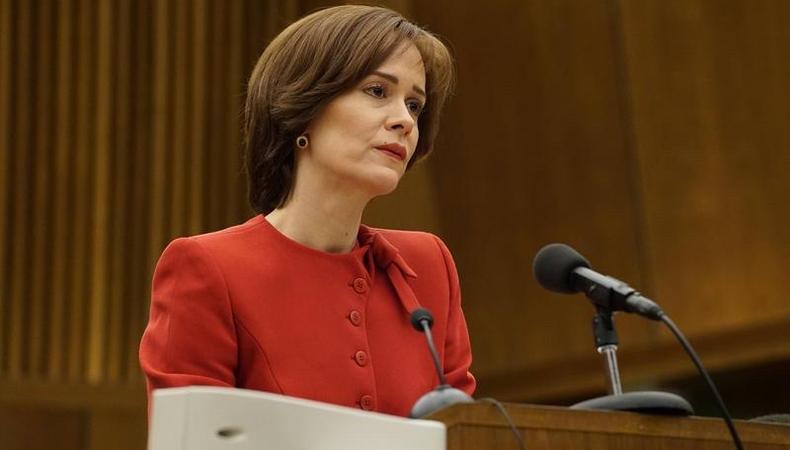 Looking for techniques on memorizing your lines? Wondering exactly how hardworking television actors commit so much dialogue to memory?

Take it from (soon-to-be-Emmy-Award-winning) actor Sarah Paulson: Having your lines down pat should be the first step when it comes to both auditions and booked roles. “I do a bunch of things,” she tells Backstage, “and sometimes all of them.” Fresh off her dual Emmy nominations for “American Horror Story: Hotel” and “The People v. O.J. Simpton: American Crime Story,” Paulson reveals the six strategies she employs to cram what can sometimes be overwhelming amounts of dialogue into her head before a shoot.

1. Study the text with reverence.
“Because I come from the theater, the text is the Bible to me,” explains Paulson. “I don’t tend to mess with it too much.” That philosophy proved especially helpful during her work on the Aaron Sorkin 2006–07 dramedy “Studio 60 on the Sunset Strip.” The show packed pages of dialogue into dizzyingly fast-moving scenes, requiring a complete mastery of the text.

“Obviously on any Aaron Sorkin show the dialogue is going to be incredibly intricate and great, and your mind has to move in a very nimble way,” says Paulson, adding that Sorkin is “very, very committed to all of his contractions remaining contractions. It’s very musical so you really have to get it to a T. On some shows it’s a little more loosey-goosey.”

Some writers encourage slight alterations or improvisations, and some directors will make adjustments to certain dialogue. But Paulson’s advice rings true: Stick to the script.

2. Practice your lines in threes.
While on “Studio 60,” Paulson also had the advantage of working with Bradley Whitford, an alum from Sorkin’s “The West Wing,” who had plenty of tricks up his sleeve to memorize tons of lines in a short span. “Whenever we would run lines, we would always run it three times,” remembers Paulson. “Doing it in threes always helps. If you’re running lines with your scene partner or about to do a scene, doing it three times sort of cements something in your mind.”

3. Write your lines down.
Another memorization method TV stars use requires only a pen and paper. “I write my lines out,” Paulson says. Seeing your character’s words written in your handwriting helps further imprint them on your mind, but the process itself helps actors in particular. “Sometimes the actual act of writing them down makes you remember them more easily,” according to Paulson.

4. Record and listen to your scene partner’s lines.
Paulson also uses the voice memo app on her iPhone to her advantage. “I record everyone’s lines in the scene but mine, and I practice it that way,” she explains. Even going in for an audition, she says, it helps to hear and respond to a voice speaking your cues and helping you remember a scene’s sequence. “Because sometimes you can be living room ready, you know? Like you know all your lines in your living room, then you get on set, and go, ‘Oh my God I don’t know any of them.’ You’re not used to someone speaking back to you.”

If actors prefer to respond to a real person speaking other lines, they can recruit a friend for the same exercise, she adds. “I think by yourself, you can only do so much. The minute you walk into the [audition] room and someone’s there looking at you and reading opposite you...everything goes out the window!”

5. Practice while moving.
Living in New York, Paulson used to walk the streets while practicing her lines for a play. “I have my headphones on and I’m mouthing,” she says with a laugh. “In New York no one cares if you look like a psycho. I’m just walking around mouthing all my words, I don’t care.

“What you want to do is marry movement with your dialogue,” she adds. “Nobody just sort of sits with their lines. Often you’re walking and talking and moving, depending on the play or TV show. You’re liable to be messing with a prop. If you only know your lines when you’re seated and concentrated on your lines, then the minute a prop master throws you a piece of paper you’ve got to hand off to someone—or a briefcase or purse or coat—all of a sudden your lines go out the door.”

6. Try any and every method!
Different actors use different memorization techniques. You may not know which work for you until you try them. For Paulson, the more tools the merrier. “I think the way to do it is just get it really, really, in your mind by doing as many things as you can. I do all of those things.”

How do you know when you’re fully prepared for that audition or first day on set? Paulson says the test involves reciting your lines accurately while performing a complicated task or activity. “If you can do all your lines while making dinner, you probably know them pretty well.”

For acting opportunities, browse all of our casting calls!

And for more audition advice, check out Backstage’s YouTube channel!

Jack Smart
Jack Smart is the awards editor at Backstage, where he covers all things Emmy, SAG, Oscar, and Tony Awards. He also produces and hosts Backstage’s awards podcast “In the Envelope” and has interviewed some of the biggest stars of stage and screen.
END_OF_DOCUMENT_TOKEN_TO_BE_REPLACED