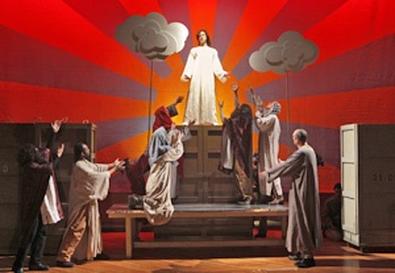 Let's just get the superlatives out of the way. "Sarah Ruhl's Passion Play" is the most exciting, stimulating, and thrilling piece of theater to hit New York since "Angels in America." Epic in scale, this three-hour-and-45-minute panorama is appropriately being presented by Epic Theatre Ensemble at the Irondale Center, a converted Sunday school in the Lafayette Avenue Presbyterian Church in the Fort Greene section of Brooklyn. Ruhl, who previously explored how cultural phenomena influence everyday lives in her "In the Next Room, or the vibrator play," here examines the ways faith and art interact with politics and personalities, as re-enactments of Christ's Passion change the destinies of the performers.

Each of the three acts takes place in a different period. We begin in 16th-century England, when Queen Elizabeth I interrupts a village's Passion play with a decree that all such spectacles are sacrilegious. The second act transports us to Oberammergau, Germany, in 1934, where the story of the Messiah has been done since the Middle Ages. A visit from the Führer and the anti-Semitic depiction of the Jewish hierarchy indicate the country's monstrous future. The last act takes place from 1969 to the present in South Dakota, where the annual local pageant was started by a German immigrant. At the 1984 presentation, Ronald Reagan—the ultimate actor-as-leader—makes a campaign appearance to praise the family values depicted.

In each setting, the amateur actors participating in the re-enactment struggle to find their true identities both within and outside their roles. Ruhl subtly draws parallels among the three eras, demonstrating that an undisciplined search for meaning can lead to tragedy. The pretty girl playing the Virgin Mary in Elizabethan England gets pregnant and pretends her condition is of divine origin. She later kills herself because she cannot deal with the truth. The boy enacting Christ in Nazi Germany joins the army to become part of a glorious ideal and becomes a murderer instead. The Vietnam veteran cast as Pilate in South Dakota finds he cannot wash his hands of the guilt he feels for his part in the deaths of innocent children. The playwright also makes pointed observations on the role of plays in society, the impact of religion on history, the similarities between performers and politicians, and a dozen other topics.

Following his acclaimed full-scale productions of the play at the Goodman Theatre and Yale Repertory Theatre, director Mark Wing-Davey has inventively reimagined his staging to accommodate the site-specific nature of this engagement. Employing about a dozen mobile prop cabinets as scenery (the subtle set design is by Allen Moyer and Warren Karp), Wing-Davey creates a found-object world reflecting the nonprofessional status of the characters. David Weiner's lighting and Gabriel Berry and Antonia Ford-Roberts' costumes imaginatively place us in each era.

The 11-member company paints humanity in its myriad fascinating shades as a galaxy of characters searching for the word of God through acting. Particularly brilliant are Dominic Fumusa, Polly Noonan, and T. Ryder Smith. Fumusa expertly depicts the inner conflicts of the men playing Pontius without veering into melodrama. Noonan is heartbreaking and funny as the savantlike village idiot in England and Germany and a bird-loving little girl in contemporary America. Smith gives a tour de force performance as the imperious Elizabeth, the quietly menacing Hitler, and the folksy Reagan.

I'm assuming the playwright's name is part of the title to avoid confusion with Peter Nichols' "Passion Play" or perhaps the actual Passion play itself, but there's no danger of mistaking this unique work for any other. It's a rich, textured tapestry of a play that all followers of serious theater and thought should trek to Brooklyn to see.