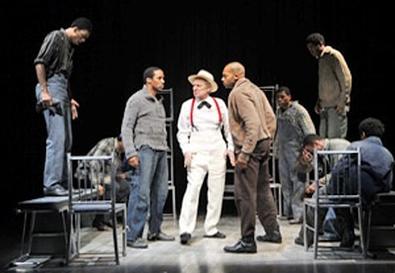 Photo Source: Carol Rosegg
First the good news: The score for "The Scottsboro Boys," the final collaboration of a legendary team—lyricist Fred Ebb, who died in 2004, and composer John Kander—is a strong one, containing songs as good as any they've given us. Which makes it all the more heartbreaking to have to report that those songs are in the service of David Thompson's ill-conceived and thinly written book, one that must rely on an awkward deus ex machina to dramatize the show's theme, because it can't do the heavy lifting itself. I can't discuss that theme or the device, because Vineyard Theatre has explicitly asked critics not to spoil what's intended to be a surprise. But it's lazy writing, and Susan Stroman's direction does nothing to mitigate the book's weaknesses, even as her confident staging works hard to do so. The result is that a potentially brilliant musical slips through the creators' fingers.

"The Scottsboro Boys" is based on a monstrous transgression of justice in Alabama in 1931, when nine young black men riding the rails were falsely accused of gang rape by two white prostitutes. The promising concept is to tell the story as a minstrel show. This once highly popular form of entertainment was, of course, also severely racist. Letting African-American characters appropriate it to tell a story of injustice could be seriously subversive. In Thompson's hands, however, the conflict between the black performers, who want to tell the truth, and the white Interlocutor, who wants a traditional presentation, is underutilized, and Stroman's direction compounds the problem by underplaying it. The writing for the two end men, who portray a gallery of racist power holders, is merely obvious rather than scabrously humorous. Most damaging, we don't know why the story is being told. Nothing new is being said about the South's racist history, at least not until that failed skin graft of an ending.

But oh those songs. The propulsive "Hey, Hey, Hey, Hey!" is an ideal opener. "Nothin' " is as subversive as the book is not. The achingly beautiful "Go Back Home" creates the necessary emotional connection with the audience, quickly cemented in the joyous and infectious "Shout!" The Interlocutor's "It's Gonna Take Time" is chilling, and "You Can't Do Me" makes for an emotionally complex, movingly understated climax.

Thompson isn't very successful at individually characterizing the "boys," hampering the talented cast. Best, because he gets the most stage time, is Brandon Victor Dixon as Haywood Patterson, the most outspoken defendant. Dixon's sympathetic presence and fine voice serve him well. Julius Thomas III registers as the sweet-natured Roy Wright, who teaches Patterson his ABCs. Christian Dante White and Sean Bradford are memorable playing the two prostitutes—all but four of the 13 actors double in other roles—with Bradford particularly scoring in his "Never Too Late" number.

As the two end men, Colman Domingo and Forrest McClendon work hard but are hamstrung by the unimaginative writing, though McClendon does manage to make something out of the condescending Samuel Leibowitz, the Jewish New York lawyer who rides into town to save the day. John Cullum, as the Interlocutor, has the necessary size but puts too much emphasis on the character's surface Southern charm and oleaginous geniality. Without sufficient menace lurking underneath, he's not enough of an obstacle.

Stroman keeps the show in perpetual motion, recombining set designer Beowulf Boritt's chairs and planks in unendingly inventive ways and choreographing some exciting routines, but she hasn't given the actors much help. Interestingly, there were also inorganic gimmicks at the heart of two other shows she's helped to shepherd, "Steel Pier" (another Thompson book with a secret: the main character is dead) and "Happiness" (he's not). Sadly, the third time is not the charm.