'Seagull (Thinking of you)' Flooded With Theatrical Imagination 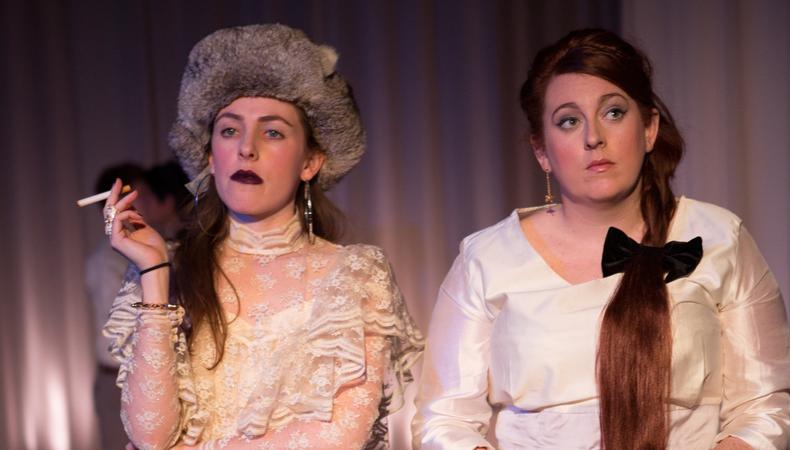 Tina Satter, artistic director of Half Straddle, a five-year-old experimental theater company that’s been gaining enthusiastic attention of late, takes on Anton Chekhov with both impudence and reverence in her “Seagull (Thinking of you.)” It’s as if she ran “The Seagull,” the Russian playwright’s 1895 masterpiece, through a shredder, threw the scraps into the wind, and assembled whatever floated back to her for her own script, about some female performers rehearsing what seems to be a production of Chekhov’s work. The characters bear names from his dramatis personae. They include the extraordinarily self-centered actor Arkadina; her lover, the equally self-centered novelist Trigorin; her neglected son, Treplov; and Nina, an aspiring actor and the target of Treplov’s amorous longings, plus such folks as Polina, the wife of the caretaker of Arkadina’s family estate, and Masha, Polina’s deeply unhappy daughter.

Every once in a while a familiar line from Chekhov is spoken. But mainly, Satter’s people seem to be talking about their own twisted relationships, sometimes inspired by what’s occurring in the play they’re rehearsing, sometimes not. The talk is dotted with deadpan non sequiturs and occasional bursts of Russian and Russian-sounding gibberish. The piece, directed as well as written by Satter, takes on a dreamlike, often distanced ambience, but there’s no doubt that Chekhov resonates in her as a theater artist. Her own abstract work is a distilled homage to his depictions of subliminal emotional chaos infused with contemporary frankness and a feminist sensibility. The Arkadina character, for example, talks about her liking for women’s breasts as well as her inability to reach orgasm when masturbating alone.

The six-woman cast is perfectly attuned to Satter’s vision. Susie Sokol gives Arkadina an unyielding but comic imperiousness, while Emily Davis’ Nina is both charming and funny, even though perpetually on the verge of tears. As Masha, Eliza Bent is sardonic yet vulnerable, and Julia Sirna-Frest instills in Polina a touching sadness. Jess Barbagallo and Becca Blackwell take on pants roles with great credibility. Barbagallo’s agitated Treplov reminded me of a young Michael J. Fox, and Blackwell’s mash-up of various fellows, including Trigorin and Arkadina’s older brother, Peter, was so convincing that I kept checking the program to see if the cast list might not reveal an inarguably male name.

The proceedings are heightened by explosions of jarring incidental music and interludes of beautiful singing by various company members. Chris Giarmo provided the original music and sound design. Other production values are similarly first rate and give further credence to the validity of Satter’s work. Enver Chakartash’s costumes are eye-filling while helping to pinpoint characters, and Andreea Mincic’s set, framed by panels of gently billowing curtains and gorgeously lit by Zack Tinkelman, heightens the dreamy atmosphere.

Despite its assets, the show remains a bit uninvolving, more construct than play. A more linear presentation with similar sensibilities might tug harder at the audience’s emotions, but Satter’s free-association “thinking” about Chekhov nevertheless impresses with its unfettered theatrical imagination.