The Secret to Calleri Casting’s Success 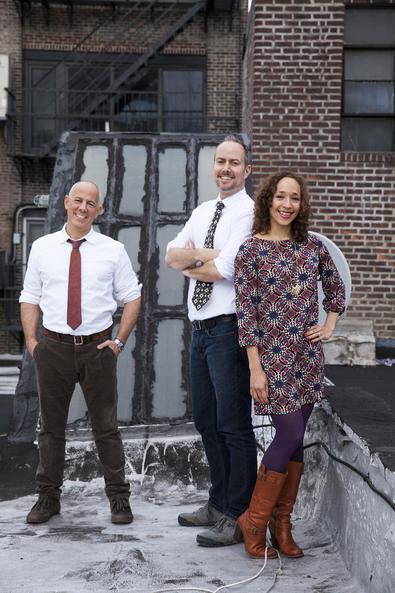 The trio behind Calleri Casting—James Calleri, Paul Davis, and Erica Jensen—catch up with Backstage to discuss the company’s success and their audition advice.

What do you look for in an actor?
James Calleri: Our relationship with actors kind of builds up over time. Rare is the occasion that an actor we’ve only seen once or twice comes in and knocks it out of the park. It sort of boils down to who you enjoy seeing when you’re in a windowless studio for eight hours.

What is the secret to Calleri Casting’s success?
Paul Davis: Dogs in the office. We have a good time. We take our job seriously, but we also love the people we work with. The business can be feast or famine and there have been slow chapters in our history, [but] we just enjoy connecting with the people that we work with and we have evolved that way.
Erica Jensen: We’ve been together for a long time, so coming to work is a pleasure. We also all have performance backgrounds, so I think we’re very sympathetic to actors and we create a really supportive environment for them to audition.
Davis: For as actor-unfriendly as the business can be, I think we’re as actor-friendly as possible while also being efficient and on top of multiple projects.

What should actors know about auditioning?
Davis: Slow and steady wins the race; that combination of persistence and patience.
Jensen: A lot of actors we talk to, they come in and they’re giving themselves a five-year deadline [to reach success], and I don’t know that deadlines are realistic. We’ve seen people who have taken lots of years before they were booking work consistently. I try to discourage from keeping those kinds of deadlines because it’s not realistic.
Calleri: It’s a long road and they have to sort of find their path

What is the relationship like between a casting director and the director?
Davis: It depends on the director. Some directors we’ve worked with are amazing and we just sort of know how they work.
Calleri: It’s about trust and listening and trusting our good tastes.
Jensen: And we know what they respond to, and we know that a certain director will respond to a certain type of actor versus another type. And there are people who want to collaborate more than others and we have to work with that as well and negotiate with a director who’s less interested in collaborating.

What are the main differences between casting for the stage versus film or television?
Davis: TV roles are much more personality-driven, so if someone can come into the room and be really interesting and nail the side, it’s less about what they’ve worked on. It’s more about what they’re doing in front of you. Whereas theater, it’s a different beast. It’s about where they went to school, who they’ve worked with, what they’ve done before.
Calleri: If we’re casting for theater, and let’s say it’s a four-character play, and the person comes in and does a great callback, some theaters are very diligent about doing homework—seeing the résumé, what other companies they’ve worked with, directors, and seeking references.

What's the toughest part of the job?
Jensen: Advocating for actors. We were just in a casting session for a play and the writer and myself were really enthusiastic about a certain actor and the director, not so much—he wanted to see other people. We were really supportive of this certain actor because we were familiar with their work and knew they would do a great job, so we have to deal with that all the time.
Calleri: Having people listen to us and take the time to watch a certain actor sometimes takes time. We have to educate the creative team and get them on board with something.