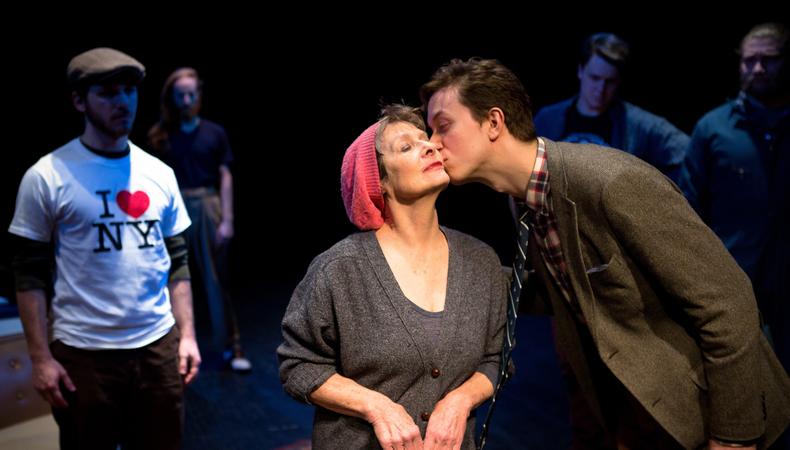 Theater Reconstruction Ensemble’s challenging but ultimately rewarding production of “Set in the Living Room of a Small Town American Play” does more than deconstruct the style of the great American dramas from the 20th century. It may sound exhausting, but playwright Jaclyn Backhaus and director John Kurzynowski essentially present a staged rehearsal, which turns out to be an apt forum for meditation on the techniques through which plays spring to life.

At the start of the show the cast sits around a table on the unadorned Walkerspace stage with notebooks and bottles of water. They read a play that chronicles the 1947 homecoming of Patrick Lorimer, a college football star who lost his scholarship after being injured in a car accident that his girlfriend didn’t survive. Nick Smerkanich, TRE’s stage manager, reads stage directions aloud as the actors informally go through the emotional fallout of Patrick’s return. Backhaus, who deftly portrays a Blanche Dubois type named Florence Del Franzia, occasionally breaks character to interject with quick dramaturgical insights. Nick Lehane seems to stand in for Kurzynowski as the pacing director, who will sometimes ask an actor to repeat a line with a different reading.

A collection of era-appropriate characters (a World War II vet, a communist) accumulates around Patrick, but it is difficult to tell whether these characters are intended to be anything more than loving sendups of archetypes created by the likes of Tennessee Williams and Arthur Miller. Regardless, the actors eventually step away from the table and direct lines to each other off book. A rug and a couch are carried in. Suddenly, the titular Lorimer family living room—once only an amorphous bit of scenic description—actually exists. Smerkanich continues to read stage directions, but now we barely notice; despite Backhaus’ quaint nostalgic script, the action of the play sweeps us up.

The stylistic epicenter comes after an adulterous tryst between Patrick’s father and his son’s high school sweetheart, Emily Vicks, played by Emily Marro. Lehane, again acting as director, whispers a stage direction into Marro’s ear: “She begins to cry.” All other onstage action stops, and as Kate Marvin’s soundscape builds to an electronic crescendo, Marro fearlessly attempts to work herself into the appropriate emotional state from the inside out, occasionally laughing at herself and then starting again. In a similarly effective episode midway through, an act of domestic violence is described in elaborately detailed stage directions while Michael Barringer, who capably plays the emotionally bruised Patrick, and Nick Fesette and Anastasia Olowin, the spirited actors who portray his Milleresque parents, stare into each other’s eyes without moving, clearly feeling every moment of the conflict.

According to Kurzynowski’s program notes, the artists of TRE initially wanted to deconstruct an actual American play from the period for this project. Thank goodness they didn’t. Even under all the layers of meta-commentary, the production’s organic hunt for an emotional authenticity that it doesn’t always find is exhilarating and would only be bogged down by, say, Biff Loman’s baggage.