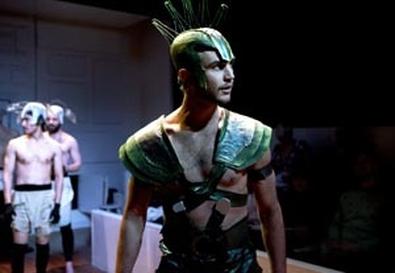 Photo Source: Laura June Kirsch
Greek tragedies' favorite themes—pestilence, passion, revenge, incest, murder, war—are brought to pulsating life in "These Seven Sicknesses," Sean Graney's adaptation of Sophocles' seven surviving plays. By the end of the four-and-a half-hour evening (with breaks for dinner and dessert), we get to know recurring characters such as Oedipus, Philoktetes, Antigone, Ajax, and Creon and their ambitions, schemes, impulses, and sexual desires.

Graney's reworking is jazzy and anachronistic yet respectful of the originals and doesn't damage the B.C. masterpieces. Yes, there are lines like "Trust me; I don't want to be king" or "Eteokles is a dick...tater" or "Are you, like, banishing me," as well as liberal uses of "Okay." But we also get "Violence set loose is violence returned" or "We adapt or we decay" or "I live pain; I am pain."

Above all, we get, in Ed Sylvanus Iskandar's vigorous direction, a sense of the excitement and thirst for power that had the Greek gods turning away in shame at the antics of foolish mortals. Actually, at the performance caught, one squeamish lady buried her head in her companion's shoulder when a foot was amputated, a throat was cut, and eyes were gouged out. How about the flock of sheep slaughtered only to rise again and be re-slaughtered?

The hospital setting is appropriate for bloodbaths, with the chorus dressed as nurses and regularly wiping the floor with towels between eviscerations. The evening is divided into three acts. The first, "Honor Lost," consists of "Oedipus," "In Trachis," and "In Colonus." Act 2, "Honor Found," features "Philoktetes" and "Ajax," two pillars of the Trojan War. Finally, in "Honor Abandoned," the eponymous Elektra and Antigone take matters of vengeance into their own hands.

In an elongated playing space, with the audience sitting on both sides, the actors concentrate on stirring up as much havoc as possible, although there are doses of wry humor. Michael Wieser's fight direction and Patrick Metzger's rumbling sound design add to the evening's ritualization, which is punctuated by songs that comment on the action.

Before the show and during intermissions, actors chat up the crowd and even serve the food (eggplant over rice for the entree, cookies and cupcakes for dessert). When it comes to performing, these members of the Bats, the Flea Theater's resident company, throw themselves bodily into their characters, even if their speech doesn't always jibe with the language. Indeed, the sheer physicality of the performances rivets attention. Among the more expert players are Seth Moore as Philoktetes, Stephen Stout as Creon, Katherine Folk-Sullivan as Antigone, and Tommy Crawford as an amusing Carrier.

Yet there's thought here also. Who causes sickness of the body politic, the ruler or the people? What individuality must be forgone to maintain a civil society? How do we solve conflicts? The questions plague us still. The last line, after all, is "There'll be more."