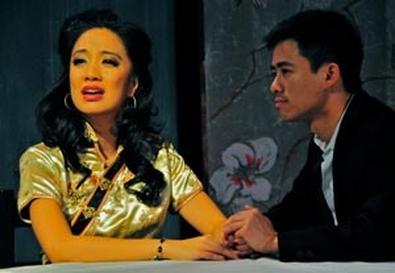 Photo Source: Corky Lee
After a lethargic first act, "Shanghai Lil's" wakes up and delivers almost enough heartfelt drama to make us forget our disengagement during its first hour. This disconnect results from Act 1's detailing in a generic, gee-whiz manner how a Chinese restaurant is transformed into a popular nightclub, while Act 2 reveals the scars that World War II inflicts upon the show's characters. Director Tisa Chang and choreographer Susan Ancheta attempt to unify the two halves of this 1997 musical, which Pan Asian Repertory Theatre is reviving at the West End Theatre, with a peppy musical theater sheen, but in the end they seem like separate shows.

In the weeks prior to Pearl Harbor, Lil struggles to keep her Chinatown restaurant alive. Chase, one of her waiters, and Mei-Mei, a professional dancer, persuade her to turn the restaurant into a nightclub where Asian Americans can perform. Chase and Mei-Mei become dance partners and fall in love. Hyacinth, Peony, and Sara, three young women who call themselves the Flower Sisters, and Jerry, a comedian, round out the bill. During the war, Shanghai Lil's becomes popular, though Chase and Jerry leave to fight in Europe, and Sara, who is Japanese, has to pretend to be Mei-Mei's Chinese sister in order to escape internment. When the war ends, Lil decides to retire, signaling an end to Shanghai Lil's and sending the other characters off to pursue their separate destinies.

Though Lilah Kan's book suffers from a split personality, her lyrics are smart and well-crafted. They don't always sit comfortably on Louis Stewart's melodies, but when they do, as in Chase and Mei-Mei's love duet "Is It Really Possible," the result is magical.

Whatever virtues the original production of "Shanghai Lil's" might have possessed, they aren't on view here. Perhaps the musical appeared during a cultural moment that highlighted its strengths. Unfortunately, Pan Asian Repertory Theatre has not been able to find a vision to reanimate it for 2011.