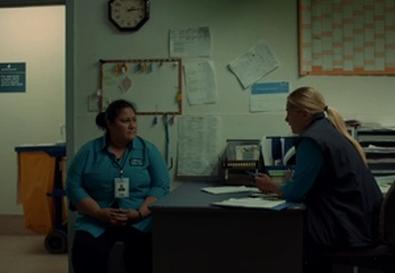 Photo Source: Zia Mandviwalla
New Zealand filmmaker Zia Mandviwalla's film "Night Shift," was part of the short film competition at the Cannes Film Festival. At 14 minutes long, the movie follows Salote, the main character, during one night as she works as a cleaner at the airport.

Back Stage sat down with Mandviwalla to discuss her inspirations, characters and how the airport is an emotional battleground.

Tell me a little bit about your film.
Zia Mandviwalla: The film is largely about how we perceive someone and how those perceptions change and shift as we learn more about them. You know it's so easy to judge someone on the appearance, the skin color, their size, their job, how they behave. And this film hopefully works to kind of remind you to reserve your judgments until you understand someone's full story.

What inspired you to do this film?
Mandviwalla: I've always been intrigued by airports. Living in New Zealand, flying anywhere in the world takes so long, and you tend to spend a lot time at airports. I've always been very interested in these incredibly public spaces, but unlike a shopping center or something like that, it's a place where there's a little bit of human drama and a lot of emotion just beneath the surface. Besides the people who are leaving to go on three-day conferences, there’s always a story of someone leaving or arriving for the first time or leaving forever or leaving lovers behind or being reunited with families or that kind of thing. So, this story of this airport cleaner is kind of part of my observations and musings, and possibly like stalking of people at airports and airport spaces.

The film looks like somewhat of a character study. As a filmmaker, is character something that's important to you?
Mandviwalla: Very much so. Character and human drama are very intriguing to me, and most of my films are character studies in shape or form.

How did you cast the film?
Mandviwalla: We put out a really wide casting brief because I didn't want to be locked into any particular ethnicity for this character. And observing the people who clean at the airport in New Zealand, you've got Pacific Islanders, Maori, Indians, Filipinos. So we just put out a casting brief for women of all ethnicities or a particular age and just really went with the person who…really brought something to the character, a kind of subtly and brutality of her performance.

Did you actually shoot at the airport?
Mandviwalla: We did principal shooting over four nights at the airport, but the director of photography and myself, we spent an additional I think it was three nights before the main shoot just hanging out around the airport with a camera and some lenses, grabbing observations, grabbing moments.

How did you get into filmmaking?
Mandviwalla: I fell into it in a strange way. I didn't study it. I went to university, and I did English and history. And when I finished university, I found myself with a degree working full time in the same part-time student job that I had been doing while at university. After a year of making coffees at a café, I was like, “Wait a second, something's wrong here.” And at the same time, I started hanging out with a group of friends who were into films. I had always been into drama, I had always been into writing. I thought, “Oh, this looks like fun. I'll give it a go!” So, I borrowed a camera and I bagged a computer, and I made a little film in my back garden, like literally in my back garden with my housemates. And the response to it was very positive and just sort of grew from there. I just kept making little films I could shoot with whatever I had available, and then I started writing stories that'd I'd look at and go, “Hm, I need some money to do that. I need some funding.” And there's really awesome, really supportive funding structures for short films and short filmmakers in New Zealand. So, I was very fortunate.

Keep up with all the fun at the Cannes Film Festival by checking out daily reports on BackStage.com, and follow @BackStageCast on Twitter for live updates.