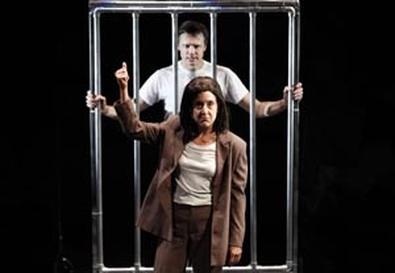 "Silence of the Lambs" might seem like an unlikely subject for a musical comedy, but this riotous "unauthorized" romp through the Oscar-winning film based on Thomas Harris' novel turns horror into humor. By highlighting the most memorable—read gruesome and vulgar—scenes, songwriting brothers Jon and Al Kaplan and book writer Hunter Bell create a delicious parody. It also doesn't hurt to have a cast of some of the most talented comic actors in town.

The show opens with a chorus of toe-tapping lambs recounting the tale of imprisoned cannibalistic serial killer Hannibal Lecter and the FBI special agent, Clarice Starling, who pursues him. The witty lyrics talk of decapitated heads in jars and Buffalo Bill, a former patient of Lecter's who is the killer Clarice and team want to catch, "wearing victims like a suit." (He skins his victims after he kills them.)

Bell's scenes complement the Kaplans' classic musical theater compositions. When Clarice discovers one of Bill's patients, who are always overweight, stashed in a body bag in a storage unit, she riffs off a series of fat jokes into her recording device. Many of the most memorable songs have phrases and titles not suitable for print. As Hannibal, Brent Barrett sings a "Phantom of the Opera"–type song to Clarice (a seriously funny Jenn Harris, with a thick West Virginia accent). Only instead of singing about the music of the night, Lecter fantasizes about sexual odors.

Director-choreographer Christopher Gattelli kindly mocks many other famous scenes from well-known musicals. Clarice vamps a Roxie Hart–type number, with the lambs sporting bowler hats and doing Fosse dance moves (jazz hands!). When Clarice reveals her childhood trauma, the lamb troupe takes the stage clad in Asian-inspired wigs, mimicking the Uncle Tom's Cabin ballet from "The King and I." Clarice's revelation that she can catch Buffalo Bill comes as a sort of "Music and the Mirror" moment from "A Chorus Line."

Barrett and Harris share nice comedic chemistry as Hannibal and Clarice, but the bit players make the show. Jeff Hiller steals every single scene he's in with his comic subtleties and memorable voice. Whether projectile ejaculating via silly string as crazy Miggs, one of the other inpatients at the Baltimore asylum where Hannibal is detained, or portraying the young Clarice in a dream sequence, Hiller shows such versatility that he could have played every single part in the show. As FBI agent Ardelia Mapp, Deidre Goodwin has little to do until the musical theater veteran suddenly steals the stage with a high-energy number that pokes fun at her small role. ("You thought I was here for nothing, but I got a role to play," she sings.) Lucia Spina's Catherine Martin, one of Bill's victims, is a nice foil for Stephen Bienskie's flamboyant (and partially nude) Buffalo Bill.

What ultimately makes the show great is that it doesn't take itself too seriously. It still feels a little like a Fringe Festival engagement (where it previously played), despite the nicer digs, and Gattelli wisely leaves room for improvisation, a skill these actors, many of whom have experience at Upright Citizens Brigade and Second City, relish. The opening chorus warns against nightmares, but don't worry, you'll wake up laughing instead of screaming.