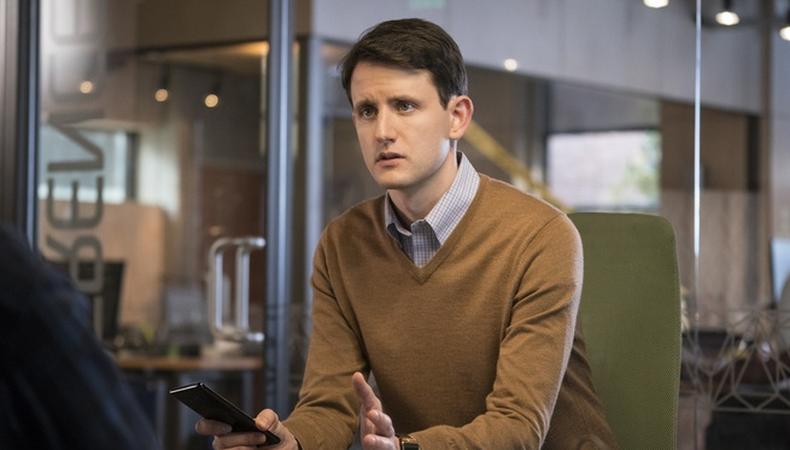 Even if you don’t watch “Silicon Valley,” you probably recognize Zach Woods from another of your favorite TV comedies. The actor has shown up to steal scenes in “The Office,” “Veep,” and “The League,” and if comedy isn’t your thing, he’s also appeared on “The Good Wife” and in the Oscar-nominated “The Post.” Woods got his start onstage at Upright Citizens Brigade without the goal of becoming an actor. Now, he plays Jared on HBO ensemble tech comedy “Silicon Valley,” which just concluded its fifth season; his character is a relatable, once-timid nerd who has developed a bit of an edge over the show’s ongoing run. He credits his co-leading role with his improv foundations, plus an acting education that continues to this day.

What has playing Jared on “Silicon Valley” added to your acting skills?
It’s added a huge amount because, first of all, it’s that 10,000 hours thing that people always talk about. Just having repped is invaluable. Being able to do scenes and play the same character for a long time gives you a degree of comfort and familiarity with not just the character but also your own problem-solving techniques: how to get your energy up when you need it to be up, how to center yourself when you feel distracted, all those situations. Reps are a big part of it. Then, there’s also the technical aspects, which I’m not naturally very good at. I’m pretty bad at hitting marks and eye line and all those specifics, so just having more “at bats” has been really helpful. The truth is, just learning how to hit a mark has been basically eight years of television work.

How did your improv training prepare you for scripted roles and auditions?
Improv was my entire training for a long time, so that was my only frame of reference for anything I did for years. Initially, I just wanted to do improv because I loved it so much. I didn’t know that I really wanted to be an actor. Then, to help pay the bills, I started doing commercials, and in commercial auditions, I would improvise all the time. I would make stuff up and change it and I think that’s how I started getting jobs in commercials, which helped me keep a roof over my head. The first movie part I got I think because I could improvise. It was “In the Loop,” which was directed and written by Armando Iannucci. I improvised a ton during that movie, which is how I started getting other acting opportunities. Improv was really the keystone of my whole approach.

Then, I started to get more scripted work. I had Anya Saffir as an acting teacher when I was 16, and I remembered her being incredible. Once I started doing more scripted projects, I realized I didn’t have any technique for scripted acting, so I sought out Anya. TV work is so coveted—it’s such wonderful work for actors and I felt like I better figure out what I’m doing. Any time I wasn’t working, I would get somebody to be a scene partner and we would do scenes from plays. We would rent a room and just do scene after scene from plays, and that’s how I learned how to act. It was a combination of the improv and years with Anya just in a room doing Arthur Miller plays. Now, I work with her on any project I get. Literally everything I do, I work with her.

And are you interested in expanding your skills beyond comedy?
I’m definitely interested in doing dramatic work, too, just basically things that are good, comedic or dramatic, it doesn’t really matter. Part of why I wanted to do it, even if I was just doing comedy though, is often the actors I think are funniest aren’t necessarily comedic actors. I think the more believable someone is the funnier they are. I can’t remember who said it, but I heard once that it’s horrible when you can see someone think they’re being funny. When you can see the actor winking from behind the character to let you know that they’re being really funny, I find that such a turn-off. The characters I find most funny are the ones that are most believable. They’re often quite strange, but when the actors can make them feel like real people while being so peculiar, those performances are always the funniest to me. I always thought “The Sopranos” was one of the funniest shows on TV. Even though it’s not a comedy, there are so many funny, weird, interpersonal moments in it. Or, Gene Hackman is unbelievably funny in “The Royal Tenenbaums,” but I think the reason he’s funny is because he just commits. I think honest human behavior is often so bizarre that you don’t need to charge it up with a bunch more comedy. People who can capture the nuances of how people actually behave, that can be so funny without embellishment.

READ: 7 Reasons Improv Can Make You a Better Actor

How do you typically prepare for an audition?
That’s something I’m constantly tinkering with. Sometimes I think I can overwork things. It’s tricky. I’m sort of a preparation nut, and I really like it when I get a part and I can work with Anya, I’ll research, I’ll think about it a lot, and I’ll work with an acting partner. It makes me feel comfortable enough to then let go in the moment when I’m actually acting on a project. When it’s an audition, though, I often don’t have time to do that more immersive approach so it’s tricky. It’s hard for me to give up control sometimes. Lately, I’ve tried to be a little more casual about it—just learn the lines, make a few decisions, go in, and treat it all like an experiment as opposed to trying to deliver some sort of complete performance. I asked Anya for advice before I went in for an audition, and she said, “Just feel your feet on the ground and then prepare to do something hugely imperfect.” That, to me, was great advice because to feel your feet on the ground gets you in your physical body and grounded, and in your mind, you’re about to do something hugely imperfect, which allows you to be open and flexible. You’re not trying to stick the landing which, at least in my case, leads to overly stiff acting.

What’s a nightmare audition experience you remember?
There was one that was before I had any real training. I went in for what I think was “Law & Order: SVU” episode. The part was a cognitively disabled victim of sexual abuse who had been abused by a doctor and would now fly into rages whenever he saw doctors. So I was playing someone with a cognitive disability which I was definitely not qualified and didn’t have the technique to do, and it was heavy and serious material. I didn’t really have that much time to prepare and I was supposed to be raging at these doctors. After the audition, the CD looked at me and went, “Well, it’s a hard part,” trying to console me. That was a really bad one.

Also, once, when I was just starting out, I went to a general meeting with a casting director. Afterward, he called my agent and just said, “I don’t like him. I just don’t get it, he’s charmless,” and he went off on this long thing about how much he didn’t like me. Looking back on it, I must have said something really alienating and I didn’t remember what it was. I don’t think I’m a particularly toxic person, but this guy evidently begged to differ. That is to say, especially people who are just starting out, don’t take that part of the industry too seriously. You’ll occasionally encounter the odd bully or weirdo, and I think it’s best not to internalize it. I don’t think it’s ultimately very meaningful.

What advice would you give your younger self?
Get more work done, like cosmetic surgery, because the parts that would have been available to me if only I had had the courage to really get the right implants—no, I think it would be to try to be a little more gentle with myself. I never went to theater school but the people who did often tell you about these sort of hard-boiled, grizzled, old teachers who say, “You have to want it more than anything and if you don’t want it, you’re probably not going to make it and you’re probably garbage.” It’s those sort of tough love approaches. I guess for some people that can be very focusing and motivating, but, for me, I wish I had been more gentle. I think I would have progressed faster if I hadn’t spent so much time self-flagellating. I think it’s so easy to think it’s productive when you’re starting out. You think being viciously critical of yourself is a way to spur yourself to grow, but I actually think it’s a waste of energy. It’s better to take the energy you’re using beating yourself up and apply it to an actual project than to apply it to kicking yourself. I think there’s that idea of an American work ethic, which I think is really good but can sometimes be taken too far.

Elyse Roth
Elyse is a senior editor at Backstage, where she oversees all casting news and features content, including her weekly casting director Q&A series, In the Room. She came to New York from Ohio by way of Northwestern University, where she studied journalism, and now lives in Brooklyn. She might see and write about awards-worthy films, but Elyse still thinks “Legally Blonde” is a perfect movie and on any given night is probably taking in some kind of entertainment, whether it’s comedy, theater, ballet, or figuring out what show to binge next.
END_OF_DOCUMENT_TOKEN_TO_BE_REPLACED